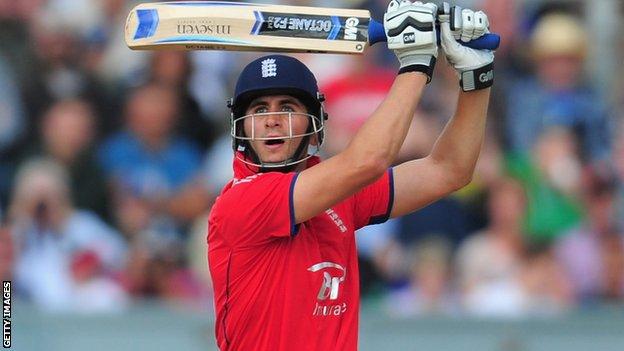 If Alex Hales is seeking inspiration when he walks out to bat for Nottinghamshire against Glamorgan in the YB40 final at Lord's on Saturday, he need look no further than his last appearance at cricket's headquarters.

Back in 2004, as a lanky 15-year-old, Hales was competing in a Twenty20 competition for promising young cricketers on the adjacent Nursery Ground.

With his team all but beaten - requiring a near-impossible 77 off 12 balls - Hales took full advantage of three no-balls to bludgeon 52 runs (eight sixes and a four) in a single over to catapult them to victory.

"It was a good day," recalls Hales, now 24, with characteristic understatement. "Until that point, I had always opened the bowling, batted at seven and tried to slog it a bit. It was then that I started taking my batting a bit more seriously."

So seriously, in fact, that after piling on the runs for Buckinghamshire in the Minor Counties League, he was offered a trial with Nottinghamshire at the end of the 2007 season and scored 218 in only his second match for the county's second XI.

By 2009, he was a fixture for Nottinghamshire firsts and by 2011 he had established himself at the top of the order in England's Twenty20 side.

Last year, he fell one run short of recording England's first international Twenty20 century when he was bowled by West Indies seamer Ravi Rampaul at Trent Bridge, his home ground.

And in August, following a typically buccaneering 94 against Australia at Chester-le-Street - his sixth fifty in 21 international innings - he leapfrogged some of the biggest names in cricket to become the number one-ranked T20 batsman in the world.

It is a rapid rise and one Hales reflects on somewhat bashfully when he admits he doesn't feel quite ready to be considered in the same bracket as explosive West Indies opener Chris Gayle or New Zealand's swashbuckling wicketkeeper-batsman Brendon McCullum.

Indeed, while every other member of the world's top 10 is an established member of their country's Test and one-day set-ups, his quest to force his way into England's plans in the longer forms of the game has been hampered by a dramatic dip in his first-class form.

Winning games for England one week, carrying the drinks for his county the next - it must have been quite a comedown?

"It was really tough, but I agreed with [Notts coach] Mick Newell that leaving me out was the right decision," says Hales. "I haven't really found any form whatsoever in the four-day game.

"It's not that I haven't been working hard; it's just that I've been finding ways of getting out.

"I definitely want to try to push for other forms of cricket with England. I obviously have a very long way to go before I start thinking about Test cricket, but as for the ODI stuff, I feel if I keep performing in the 40-over game for Notts I can definitely put myself in the frame.

"I don't want to be labelled as just a Twenty20 player."

Born in Hillingdon, Middlesex, Hales comes from sporting stock. His father Gary was a serial record-breaker in league cricket, while his grandfather Dennis once took Australian great Rod Laver, who won 11 Grand Slam titles in his career, to five sets in a Wimbledon qualifier.

His greatest advantage in the hard-hitting world of Twenty20 is a 6ft 5in frame that allows him to get his bat to balls that would be out of the reach of shorter men.

To some extent, Hales is a victim of his own success, as his Twenty20 prowess makes him a target for franchises around the world and leaves him precious little time to hone his first-class skills.

Last winter, only hours after stepping off a plane from England, he cracked 89 off 52 balls on his debut for the Melbourne Renegades in Australia's Big Bash.

"The last three winters I've been away playing T20 and one-day cricket, so I haven't really had time to work on my four-day game," admits Hales.

"The technique and mind-set in both forms of the game are very different and that is something that, especially with opening the batting in both forms, I have struggled to come to terms with.

"I have just completely lost my form this year, but I'm looking forward to next year beginning, a fresh start."

Before he knuckles down again with Notts, however, Hales will play another Big Bash campaign for the Adelaide Strikers this winter ahead of the Twenty20 World Cup in Bangladesh and a possible debut season in the Indian Premier League.

Barred from playing in last year's edition by Nottinghamshire, Hales says talks with his county about entering next season's player auction in February are progressing well.

Should he prove a hit in the highest-paid league in the world, would Hales ever be tempted to give up the day job and earn a living as a freelance Twenty20 globe-trotter?

"I don't feel I'm quite ready for that yet," he replies. "I'm only 24 and I've still got a lot to offer for Notts in the long-form and one-dayers.

"But if the four-day stuff doesn't work out as well as I hope, maybe that could be a route further down the line."

Back to the present, and Hales is excited by the prospect of appearing in his first major final on Saturday.

And if Hales can produce anything similar to his boyhood bravura, all bets will be off.