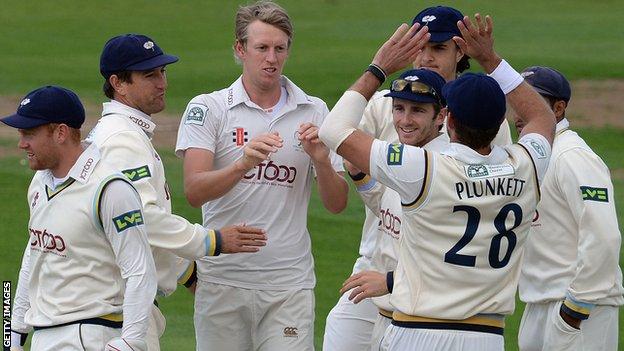 The Tykes resumed on 109-3 and they crumbled to 210 all out, with a solitary batting bonus point.

Only Sam Robson (45) frustrated the hosts' seam attack and, when he was out to make it 86-4, Middlesex collapsed before Yorkshire reached 4-0 by close.

Seemingly only two days of Chester-le-Street rain will block Durham's target of 69 runs and the Championship crown.

Despite Ryan Sidebottom's stunning 4-27, backed up ably by Steven Patterson (3-44) and Jack Brooks (3-34), Yorkshire will no doubt be deflated by news from the North East as champions-elect Durham closed day two against Nottinghamshire on 7-0.

In reality, had all but extinguished the Tykes' hopes of reclaiming the title they last won in 2001.

Their batsmen soon folded at Headingley with Jonny Bairstow quickly departing, before Gary Ballance, Adil Rashid and Liam Plunkett all fell in the teens, although Kane Williamson did make a creditable 52.

When Patterson edged Corey Collymore to John Simpson, he became the wicketkeeper's sixth catch of the innings and Yorkshire were all out for 210.

But the visitors faired no better as Patterson tore through the top order to reduce them to 45-3, before Sidebottom and Brooks took over and polished Middlesex off, with Bairstow too claiming six victims behind the stumps.

Adam Lyth and Phil Jacques survived five overs on what will no doubt have been a flattening day at Headingley.

"Yorkshire claimed the ascendency in the match after the Middlesex batting failed to produce a partnership to defy conditions that heavily favoured the bowlers.

"With grey skies over head once again this morning, the hosts' batsman, led by a masterful fifty from the technically impressive Kane Williamson, scraped to 210 all out.

"The visitors looked to be in good shape at 86-3 but succumbed to a middle order collapse which has dogged them for the past two seasons.

"Middlesex will need a big individual performance when they bat again in the run-chase."