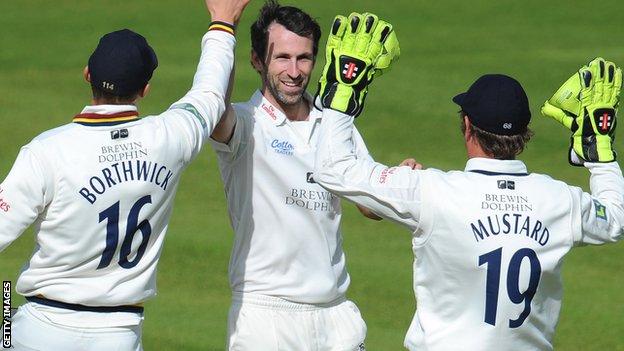 Durham need another 62 runs to win the County Championship after bowling out Notts for 246 on the second day.

Paul Collingwood (88 not out) added 35 in the morning to help the hosts to 256 all out and a fifth bonus point, along with a 178-run first-innings lead.

Steven Mullaney (72) held Durham up but he fell to Graham Onions (3-50) as the hosts sensed a two-day victory.

David Hussey dug in and was last man out for 57 before Durham, with light fading, faced one over before stumps.

After being frustrated for the early part of the afternoon, a flurry of wickets gave Durham hope of wrapping up the title, but having been set just 69 to win, they opted not to ask for the extra half hour despite a less than positive weather forecast for the third day.

Mullaney, who was dropped in the slips on 59, spent 162 balls at the crease and hit 11 fours to frustrate the home side, but his dismissal was quickly followed by those of Samit Patel for four and Chris Read for a 10-ball duck, as Notts lost three wickets for nine runs.

Hussey, who passed 13,000 first-class runs during his innings and Paul Franks (29) put on 59 for the seventh wicket, before the latter was bowled by leg-spinner Scott Borthwick.

Andre Adams fell to Ben Stokes (3-55), who had to go off at one point with a jarred toe, and Luke Fletcher made a quickfire 20, but it was Hussey's knock that forced Durham - previously champions in 2008 and 2009 - to put the celebrations on hold overnight.

Notts are still not out of relegation trouble and will be looking nervously over their shoulder at proceedings at Edgbaston, where basement club Surrey have picked up full batting bonus points against Warwickshire.

"We just felt it probably wasn't necessary for us to push the issue tonight [and take the extra 30 minutes].

"We've still two days to go and, although there may be a bit of rain about tomorrow, we don't feel under any pressure.

"We didn't think for a moment they [Notts] would lie down. We did very well in the first innings with some decent bowling conditions which we took advantage of.

"But we knew it would flatten out a bit and knew it was going to be hard work second time round, particularly once they got through the new ball, but the bowlers stuck to the task really well."