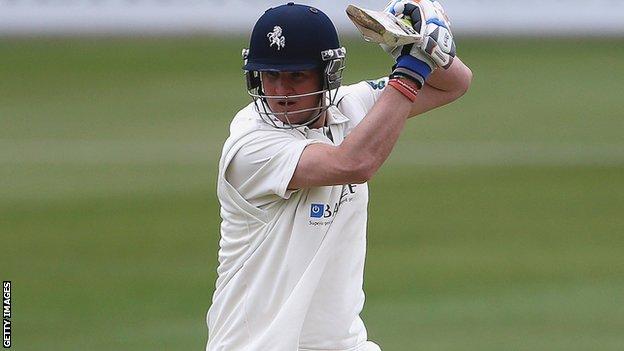 Rob Key and Brendan Nash made hundreds for Kent to hold up promotion-chasing Northants on day two at Wantage Road.

Key reached his 50th first-class century with two sixes off James Middlebrook (6-78), but edged to slip in the same over and departed for 101.

Both players also passed 1,000 runs for the season, as did all-rounder Darren Stevens, who contributed 63 before Kent were all out for 418 in the final over.

With most of the opening day lost to the weather, the home side's hopes of a victory that might be enough to clinch a place in Division One next season, may have disappeared.

However, they picked up two bowling bonus points, and having taken a 21-point advantage over Essex into the game, they are still well-placed to go up with Lancashire.

Off-spinner Middlebrook completed his best best figures of the summer when he had tail-enders Mark Davies and Adam Ball (32) caught in the day's final over.

"How many times does a county see three of its batsmen pass 1,000 Championship runs for the summer in the same innings on the same day? Not very often!

"That is exactly what happened as Kent's Robert Key, Brendan Nash and Darren Stevens achieved that feat at Wantage Road.

"A shortage of wickets means that Kent are not in the promotion hunt, but on this performance, with the bat at least, they looked more like promotion candidates than Northamptonshire."