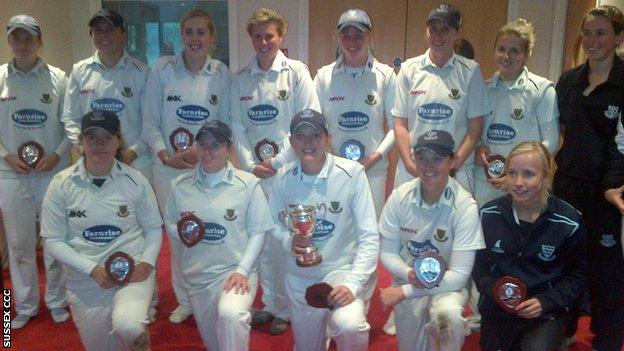 Sussex have won the Women's County Championship for the sixth time in 10 years after beating Yorkshire.

After reaching 229-4 from their 50 overs in the final at Milton Keynes, Sussex bowled out their opponents for 133 to win by 96 runs.

"The players have played extremely well all season and every single player has put in performances."

England star Sarah Taylor and 16-year-old Izzy Collis were the main contributors to Sussex's total, scoring 128 not out and an unbeaten 51 respectively.

Izi Noakes then took a wicket in the opening over of Yorkshire's reply before captain Holy Colvin weighed in with three wickets.

Sussex, who last won the title in 2010, missed out on the Women's Twenty20 title last week when they lost to Kent.

"It was a great innings by Taylor and Collis to put us in a good position and then everyone topped it off in the field and with the ball," Burton added.

"I am very proud of the players. We have a great team and to come back fighting after last week's T20 loss showed we have tremendous strength and character within our squad."