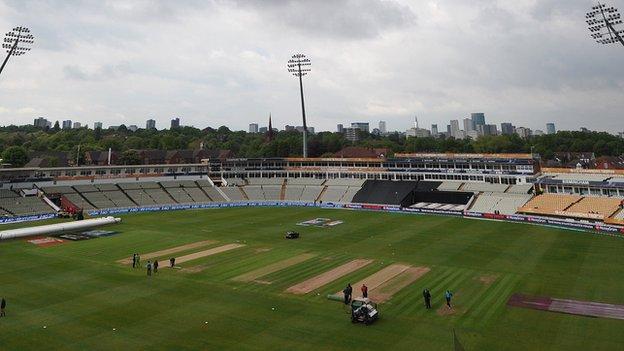 Surrey's hopes of avoiding relegation in the County Championship were marred by a weather-ruined day at Edgbaston.

Heavy rain ended play for the day before lunch after just 17.5 overs, during which Surrey had reached 59-2.

Warwickshire fast bowler Keith Barker swung the ball in overcast conditions to claim the wickets of Dom Sibley and Rory Burns, both leg before wicket.

But, from 18-2, Surrey were rescued from further punishment by Hashim Amla (30no) and Vikram Solanki (20no).

And persistent rain for the rest of the day led to play finally being called off an hour and a half before the scheduled close.

Bottom club Surrey began this game on 103 points, 29 points adrift of safety, with just one more game to come after this one - at home to title-chasing Yorkshire at The Oval next week.

But, if they fail to win at Edgbaston, they will almost certainly be relegated.

He was one of three changes for Warwickshire, whose frustrating failure to be able to pick a settled side, due to injuries and international calls, has blighted their attempts to retain the Championship title.

Fit-again all-rounder Rikki Clarke returned in place of Stefan Piolet, while Recordo Gordon came in for only his third Championship appearance in place of the injured Darren Maddy.

"The loss of most of the first day's play will hurt Surrey more than it does Warwickshire, as they need to win to keep alive any realistic chance of avoiding relegation.

"Every hour spent in the pavilion takes Warwickshire closer to safety, although relegation is only now a very distant threat to the Bears now and the rain is actually hindering their hopes of breaking into the top-four prize money places.

"It's also making it harder for Keith Barker to reach the milestone of 50 Championship wickets this season. He moved onto 39 with two excellent swinging deliveries which did for the Surrey openers. "

"Just 17.5 overs of play were possible, but Surrey had to survive a testing examination from the Warwickshire bowlers.

"After Dom Sibley was lbw to Keith Barker, Rory Burns followed in identical fashion. But Hashim Amla and Vikam Solanki used all their experience against the swinging ball to add 41 until rain forced the players back to the pavilion.

"The rain never stopped and Surrey will come back on Wednesday knowing they will have to press on with the bat and force a positive result out of what is effectively now a three-day game.