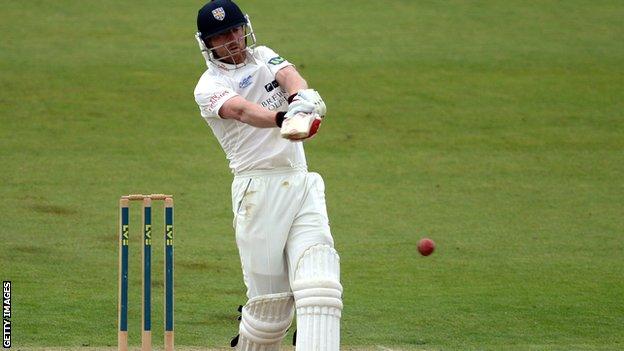 Durham took a big step towards winning the County Championship title by taking a 129-run lead over Nottinghamshire on the first day at Chester-Le-Street.

After dismissing Notts for only 78, Durham crumbled to 74-6.

- If Durham beat Notts and collect at least 21 points, they will be champions

- If Yorkshire draw against Middlesex and get 11 points, Durham would only need to draw with Notts and earn eight points to be crowned champions.

Only Riki Wessels (17) and Chris Read (11) reached double figures for the relegation-threatened visitors as they were dismissed in 26.3 overs.

Durham can clinch the title by taking 21 points from the game, although this will reduce if Yorkshire drop points in their game with Middlesex.

They easily secured three bowling bonus points, so a score of 250 or more in their first innings and a subsequent victory would guarantee their third title success in six years, no matter what Yorkshire do.

After early joy for Andre Adams (4-51) in Durham's reply, Collingwood and Mustard led the recovery with what was easily the game's highest partnership.

Mustard, who hit 11 fours in 109 balls at the crease, fell late on to Steven Mullaney (2-14), who quickly picked up the wicket of Onions for eight.

Durham captain Collingwood was still there at the close after spending nearly three hours at the crease.

"Notts were all out for 78, their lowest score against Durham. But while many are thinking there were demons in the pitch I would disagree. They are the third team to fall for a new low to Durham in the last fortnight! It is just a sign of how good the bowling is.

"Graham Onions, Chris Rushworth and Jamie Harrison took three wickets each. Rushworth became the second player after Onions this season to take 50 Championship wickets - a first for him.

"Collingwood and Phil Mustard's seventh wicket stand brought sanity to the proceedings late afternoon after Durham had been reduced to 74-6 .

"Pitch inspector Jack Birkenshaw is here but quite frankly the bowling was just very good. We were watching the action from right behind the bowler and a lot of batsmen edged balls. On a chilly morning - and a 10.15am start in autumn, we were effectively back to early season conditions and early season dismissals!"