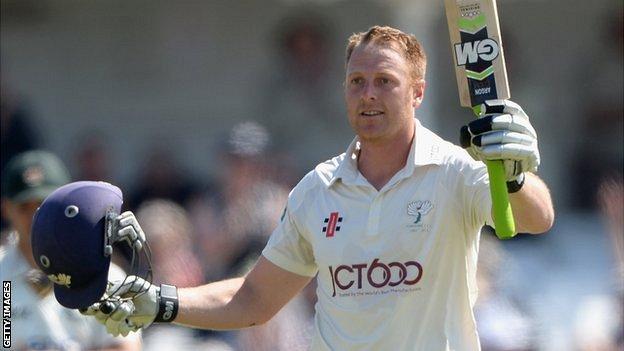 Yorkshire captain Andrew Gale believes there could still be a thrilling finale in the County Championship title race.

The White Rose county head into this week's penultimate game of the season against Middlesex at Headingley, 27.5 points behind leaders Durham.

"We have two games we think we can win, and while it looks like Durham's title to lose, you never know."

He continued: "If Durham slip up this week and we win, that could mean a 10-point deficit going into the last game, and we won't be giving up, that's for sure."

Durham play Nottinghamshire at Chester-le-Street this week, before finishing their season against Sussex at Hove next week.

- If Durham beat Notts and collect at least 21 points, they will be champions

- If Yorkshire draw and get 11 points, Durham would only need to draw with Notts and earn eight points to be confirmed as champions

Yorkshire's final game sees them travel to play Surrey at The Oval, but the match could be irrelevant if the north-easterners maintain the outstanding form which has seen them win their last four championship matches, and six of their last seven.

Gale acknowledged Durham's form has been impressive. "They've played some really good cricket in the last month or so, and you've got to take your hat off to them. The run they've had in the last six weeks has been brilliant and we haven't matched that."

He also defended his decision to offer Sussex captain Ed Joyce the opportunity to set Yorkshire a target at Hove on Saturday.

Sussex went into the final day of the game having lost two second innings wickets and leading by just 14 runs.

Although most observers expected Yorkshire to try and bowl their opponents out cheaply on the final morning, Gale served up two hours of declaration bowling to enable Sussex to set Yorkshire a testing 300 to win in a maximum of 64 overs.

As it was rain ended the game early with Yorkshire on 84-2, while Durham went on to thrash Derbyshire by nine wickets.

"Trying to bowl them out was an option, but I thought our best chance of winning was chasing down a total," said Gale. "It was a good pitch, and if we hadn't got wickets in the first hour I'm sure Sussex wouldn't have been keen to set up a game."

Joyce admitted he had been surprised by the decision, and Durham captain Paul Collingwood made clear he was unimpressed.

The Durham skipper told BBC Radio Newcastle: "It was disappointing to hear [Yorkshire] were trying to contrive a result. We like to play our cricket the normal way by putting pressure on teams and we can come away from this know we did everything 100% the right way."

Yorkshire have announced an unchanged squad for this week's game.

If Durham beat Notts and collect at least 21 points, then they will be crowned champions this week.

Durham will also win the title by earning eight points from a draw with Notts if Yorkshire draw and get 11 points in their game.