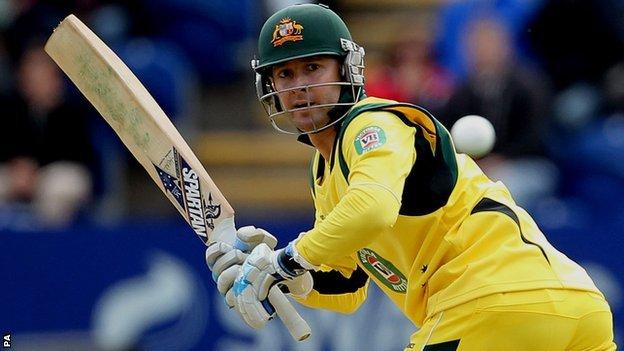 Australia captain Michael Clarke is a doubt for the deciding one-day international in his side's five-match series against England.

Clarke has a recurrence of a back injury ahead of the game in Southampton and will have a late fitness test.

Australia are already without Shaun Marsh, who has a hamstring injury, and he is expected to be replaced by Phil Hughes.

The series is tied at 1-1 following England's three wicket win on Saturday.

"It's a big game. But if he is not right, we won't risk him," said Australia coach Lehmann.

"It's an important series, but we've got another one-day series [against India] and an Ashes series coming up."

The Hampshire batsman is hoping to impress again in his bid to earn a call-up for the Ashes series in Australia over the winter, although he is refusing to think too far ahead.

"I've got to take each game at a time," said Carberry. "I can't afford not to; I've got to focus on what's in front of me.

"Whoever is picked [for the Ashes], best of luck to them. I will just worry about Monday for now."