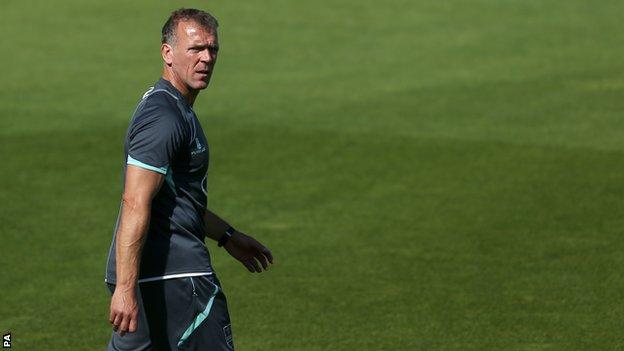 Surrey executive director Alec Stewart pointed the finger at the batsmen after defeat by Somerset left his side in serious danger of relegation.

With two games left, Surrey are bottom of the County Championship table.

"I've no problem if you're out by good bowling but when you gift your wicket then you have to look at yourself," he told BBC London 94.9.

"They have to take more responsibility, do the hard work and get totals which give the bowlers a chance."

Surrey were bowled out for 195 and 197, with Rory Burns' 40 in the second innings the highest individual score for the team over the whole four days in Taunton.

"I have sympathy for the bowlers - the batting has got to improve," added Stewart.

"From a bowling point of view it's very difficult because when you're defending low totals, bowlers do go searching for wickets and when you do that you open up the option of also going for runs.

"When you don't score 200 in either innings you're not going to win too often. We got exactly what we deserved which was a loss."

Surrey have won just a single game in the County Championship all season, amassing the lowest total of batting bonus points in Division One along the way.

"It's not through a lack of effort - it's the application, the concentration, the execution, shot selection - all the basics of batting," said Stewart.

"There are some good players here but we're not batting collectively and individuals aren't taking enough responsibility."

Surrey's remaining games are against Warwickshire, starting on Tuesday 17 September, and Yorkshire.

"The job's even harder after this loss. We knew going into this game what he had to do, but we knew six or eight or even 10 games ago what we needed to do and we haven't done it," said Stewart.

"It's alright knowing what you've got to do, you've then got to go and do it so the only people who can do that are the people in the dressing room.

"We've got to go to Warwickshire which won't be easy. We have to win that and try to pick up maximum bonus points which we haven't done this year.

"If we start feeling sorry for ourselves, you may as well not bother turning up. But if you turn up with the right attitude, apply yourself a lot better and make sure your skill levels are up then you've got a chance.

"People have got to look at how they perform and perform a lot better in the last two games."