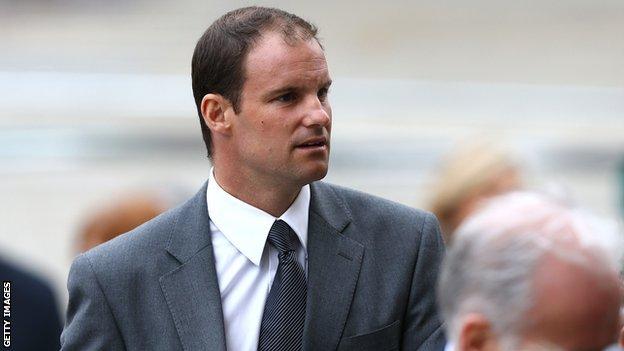 Hugh Morris says Andrew Strauss would do a "great job" were he to succeed him as managing director of the England and Wales Cricket Board (ECB).

The ex-England captain is yet to decide whether to apply for the job vacated by Morris, who has rejoined Glamorgan.

And Michael Vaughan said Strauss would work well in the role with England coach Andy Flower.

Strauss retired from all forms of cricket in August last year, having captained England in 50 of his 100 Tests and scored 7,037 Test runs at an average of 40.91, leaving him ninth in his country's all-time list of run-scorers.

His assured news conferences during a distinguished playing career, in which he led England to home and away Ashes series wins, led to suggestions he would be ideal for an administrative role.

Morris, who will rejoin Glamorgan as chief executive in January, refused to be drawn on his preferred choice for the top job at the ECB.

But he said Strauss was "somebody with great gravitas. If interested in the role and fortunate enough to get it, he'd do a great job".

Last year Strauss was appointed to the International Cricket Council's cricket committee, which meets twice a year to consult on playing matters and offer recommendations on technical issues and rules.

Strauss has also been used on a consultancy basis by the ECB this year to work with Morris on a development programme for England's Under-17s.

Morris added: "It would have been very silly of me not to use the knowledge and experience that Straussy's got.

"Generally we lose too many people like that from the game. To work with him has been really rewarding and he's made a really valuable contribution to the department already."

They worked as coach and captain during England's back-to-back Ashes wins and rise to the top of the world Test rankings.

Former England captain and TMS summariser Vaughan said: "Yes, the roles would be reversed in a 12-month period, but I can't see how the relationship wouldn't be a good one.

"Both are well-respected - they are very close as a pairing. It needs to be a real tight bond."