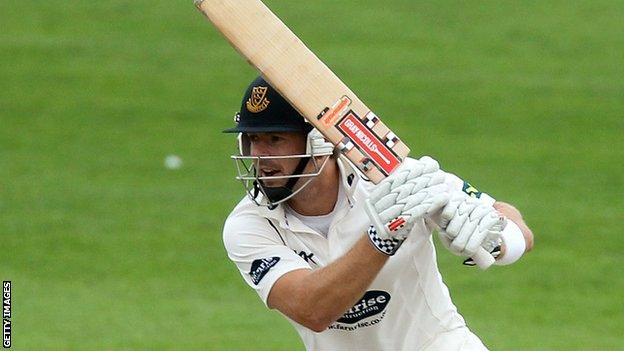 Yorkshire's chance of victory at Sussex was scuppered by rain, denting their Division One title hopes.

Sussex moved quickly on day four - with Yorkshire aiming to set a chase using part-timers - as Chris Nash (167no) and Rory Hamilton-Brown (126no) hit tons.

This led Sussex to declare on 333-3, setting the title-chasing visitors 300 to win from 64 overs.

Adam Lyth (40no) looked in form, but rain brought a premature end to proceedings with Yorkshire 81-2.

And with table-toppers Durham taking a quite remarkable victory at strugglers Derbyshire, Yorkshire lie 27.5 points off the summit of Division One with just two games left to play this summer.

Durham could seal the Championship title with victory against Nottinghamshire next week, a scenario Yorkshire tried to prevent early on the final day at Hove, employing part-time bowlers to try and create a run chase.

Nash and Hamilton-Brown duly obliged with a 260-run fourth-wicket stand, with Ed Joyce - having reached 1,000 Championship runs for the season - the only Sussex wicket to fall on the day when Phil Jacques took his maiden first-class wicket in his 186th game.

Yorkshire took the unusual step of putting out Liam Plunkett to open in the hope he would provide a strong start, but he fell for just 11 before the clouds opened and ended Yorkshire's hopes of achieving victory.

Yorkshire will now know they need a win in their final two games, against Middlesex and bottom club Surrey, to have any chance of the title.

"Was this the day that the championship race took a decisive turn towards Durham?

"While the leaders steamrollered Derbyshire, Yorkshire were in the end frustrated by the weather, when their quest to score 300 in 64 overs, ended at tea with the score on 81-2, needing a further 219 from 37 overs.

"An agreement between both captains saw Sussex gifted cheap runs so that a lunchtime declaration could be made. Chris Nash and Rory Hamilton-Brown took advantage to score somewhat futile hundreds.

"Yorkshire had made steady progress before heavy drizzle ended the match early, leaving the visitors now 27.5 points behind Durham going into the final two games."