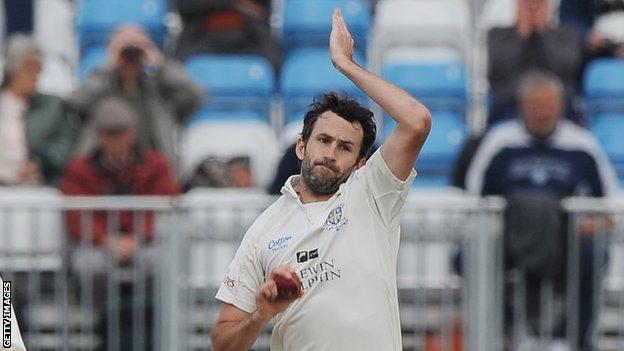 Graham Onions inspired Division One leaders Durham to a remarkable nine-wicket win at lowly Derbyshire to put them in the title race's driving seat.

Earlier, Derbyshire's Tony Palladino (6-90) saw Durham all out for 325 in their first innings, just 27 ahead with the game looking destined for a draw.

The visitors eased to the target to move 27.5 points clear at the top.

Durham's victory, coupled with Yorkshire's draw at Hove because of rain, means they now hold all of the cards in the the race to lift the Division One title, and could wrap it up as early as next week with a victory at home against Nottinghamshire.

Mark Stoneman surpassed 1,000 first-class runs for the season for the first time in his career

The result had looked highly unlikely at the start of the final day, but after Palladino's season-best bowling figures wrapped up Durham's first inning, the visitors' seamers began to tear through the Derbyshire batting attack, with England international Onions the chief architect.

Only three batsmen managed to get out of single figures, with skipper Wayne Madsen's 16 from 45 balls their top score.

And despite the fall of Mark Stoneman for just seven, Durham strolled to their target with more than 37 overs to spare.

"Durham have beaten Derbyshire by nine wickets to open up a gap of 27.5 points over Yorkshire with two games to play.

"There are still 48 points left to play for this season, but this was a massive win for the visitors and their first on this ground.

"It is also worth pointing out this is the first time they have won nine matches in a season. The game looked to be heading to a draw at lunch with Derbyshire on 22-1, but they lost nine wickets in 22.1 overs after lunch, for just 41 runs.

"They were all out for 63, their lowest score in a Championship match against Durham. Durham then knocked the runs off inside eight overs for the loss of just Mark Stoneman."