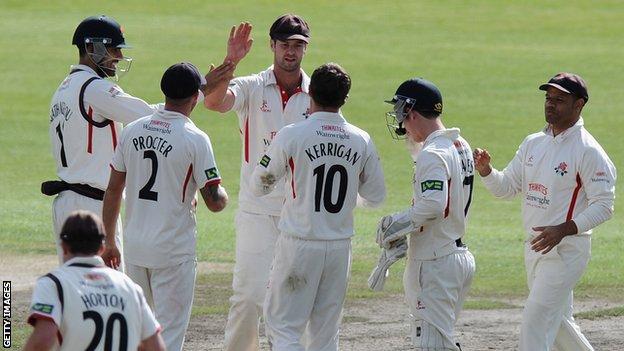 Lancashire secured promotion back to Division One at the first attempt after they drew with Leicestershire and third-placed Essex drew at Kent.

The Red Rose, relegated last year, took 11 points from the Old Trafford game, meaning only an Essex win would have prolonged their promotion wait.

The runaway leaders have now ensured a return to the top tier with two games still yet to be played this season.

To be crowned champions, Lancashire need only 12 more points.

It means that Lancashire, having not lost a Championship game all season and 36 points ahead of second-placed Northants, could wrap up the Division Two title as early as next week at home to Hampshire.

But in their rain-affected fixture at Old Trafford, Leicestershire, looking to avoid an eighth defeat of the season, provided strong resistance on the final day.

Resuming on 60-3 in reply to the hosts' declaration on 453-7, Ben Raine provided the visitors' most fruitful innings with a career-best 72 on his 22nd birthday.

Niall O'Brien (63) also hit a half-century, his sixth of the Championship season, while Tom Wells finished with a career-best of 43.

However, Simon Kerrigan (3-95) and Kyle Hogg (3-52) proved problematic for Leicestershire and took out the middle order.

Tom Smith (2-58) then wrapped up the Leicestershire tail for 329, taking the last wicket of James Sykes (34) - who was brilliantly caught by a diving Ashwell Prince - after which the players shook hands immediately.

"It's a great effort, especially to get promotion with two games to go. Obviously we've got a very good chance of winning the title as well, but promotion was the main goal, to be back into the first division. It's a real relief in some ways and a great credit to the players in how they've played the season.

"We certainly want to win it because winning's a habit. We also want to stay undefeated, which would be a great achievement as well. Over the course of a summer, it's a long time.

"We're in a very strong position at the moment, and we've got to play good cricket for two more games. It's a bit clichéd, but we'll take it as we have done all the way through - it's one game at a time. We'll go to Bristol and do the same sorts of things, try and play our brand of cricket and try to get a win."