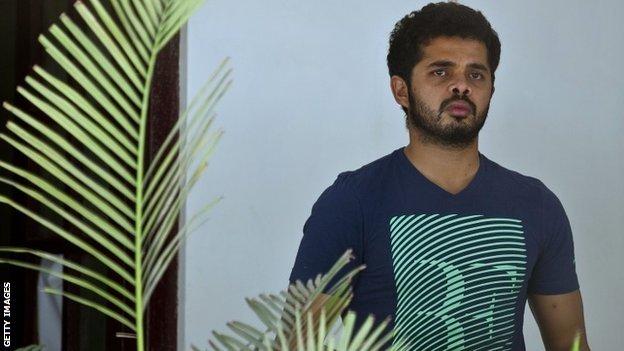 Former India fast bowler S Sreesanth has been banned from cricket for life for spot-fixing.

The 30-year-old, who played 27 Tests for India, was arrested in May on suspicion of fixing in the Indian Premier League (IPL).

He was charged with taking money to concede a pre-determined number of runs in three different IPL matches.

Ankeet Chavan, Sreesanth's team-mate for the Rajasthan Royals, was also banned for life.

No ruling was passed on Ajit Chandila, who was arrested alongside Sreesanth and Chavan, while Amit Singh and Siddharth Trivedi were banned for five years and one year respectively.

Delivering its ruling on Sreesanth, the Board of Control for Cricket in India said: "Mr. S. Sreesanth is banned for life from playing any representative cricket, or in any way being associated with the activities of the BCCI or its affiliates."

Right-armer Sreesanth, who has previously played for Warwickshire, made his Test debut against England in Nagpur in 2006 and took 87 Test wickets in a career that ended against the same opponents at The Oval in 2011.

He also played in both the World Twenty20 final of 2007 and the World Cup final of 2011, with India successful on both occasions.

However, disciplinary problems were often never far away, most notably in a spat with India off-spinner Harbhajan Singh during the inaugural season of the IPL, which resulted in Harbhajan slapping Sreensanth on the pitch.

Pakistan trio Salman Butt, Mohammad Asif and Mohammad Amir were jailed for their part in a spot-fixing scam in the Lord's Test against England in 2010.

Another Pakistan international, Danish Kaneria, was banned for life by the England and Wales Cricket Board for his involvement in the fixing that saw Essex bowler Mervyn Westfield jailed.