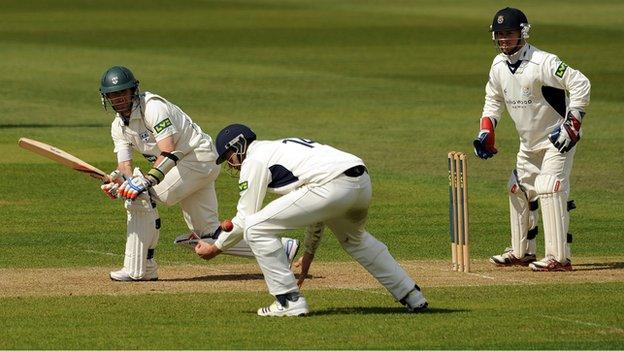 Worcestershire will start the third day at New Road on 101-2, still needing 178 to avoid following on against Hampshire for the second time this summer.

But the hosts then slumped to 21-2 before a recovery in the final session.

Thilan Samaweera ended the day on 40, with Moeen Ali on 28, after the early loss of openers Daryl Mitchell and Matt Pardoe, as Worcestershire target their first aim of avoiding a second innings defeat against Hampshire this summer.

The first wicket of the day came early on when Hampshire were stung by the loss of overnight centurion James Vince, who went to the second ball of the day.

Without adding to his 106, he edged Richardson to slip, where Mitchell got his hands to it, parrying to Moeen alongside him.

Adam Wheater then quickly followed, a second run-out victim of the innings for latest signing Ross Whiteley, before Terry put on half-century stands of 77 with Bates and 81 with Wood, who then shared a ninth-wicket partnership of 55 with on-loan Kent all-rounder Coles.

Richardson's four-wicket haul took the veteran paceman's first-class haul for the season to 63 - still 10 shy of his summer's best of 73 for the county in 2011.