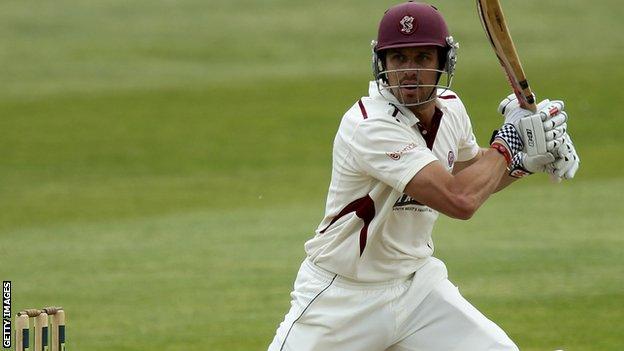 Nick Compton struck a crucial 66 as Somerset battled into a vital lead over relegation rivals Surrey at Taunton.

The hosts then lost openers Marcus Trescothick and Chris Jones in the first nine balls of their reply.

But Compton's innings and a 68-run stand between Peter Trego and Craig Meschede took Somerset to 260 all out, before Surrey reached 13-0, trailing by 52, when bad light ended day two early.

With heavy rain forecast for Friday afternoon, Somerset will be hoping for another fast start when fellow strugglers Surrey begin their second innings on the third morning.

The hosts' reply then got off to a poor start when Trescothick and Jones fell early, but Compton's 88-ball 66, which included 11 fours, proved vital in helping Somerset to a competitive score.

A healthy lead had looked unlikely, however, when he and Alex Barrow (13) were both dismissed in one over from Dernbach, who took 3-80, to leave them 133-6, but Trego (38), Meschede (27) and then Piyush Chawla (32) all dragged Somerset comfortably beyond the Brown Caps' first-innings total of 195.

Surrey openers Rory Burns and Dominic Sibley saw out 3.3 overs before bad light forced the players off for a second time in the evening.

"It's a shame about the bad light and drizzle which brought a fascinating day to a premature end.

"Compton's 66 was an innings of real class, but partnerships were the key for Somerset, as 68 between Trego and Meschede and 54 from Chawla and Gregory took them to a more competitive score.

"Surrey bowled well early on but the seamers lost their sting as the wicket lost its pace."

"Somerset ended the day with their noses in front, after Nick Compton's 66 helped them recover from 4-2, but a crucial ninth-wicket partnership of 55 between Piyush Chawla and Lewis Gregory was the key moment of the day.

"For Surrey, Zafar Ansari bowled well to pick up 3-30 and the three quicks of Jade Dernbach, Chris Tremlett and Stuart Meaker all made life difficult for the Somerset batsmen.

"Rory Burns and Dominic Sibley took Surrey through to stumps with the scoreboard reading 13-0 when bad light brought an early end to proceedings."