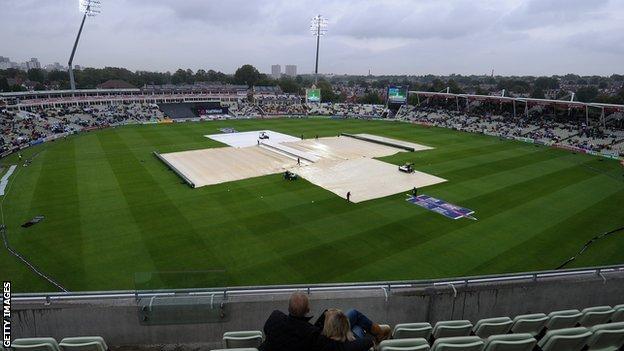 Rain ended the third one-day international between England and Australia after 15.1 overs at Edgbaston.

In the play that was possible, England slipped to 59-3, with Michael Carberry, Kevin Pietersen and Joe Root dismissed.

Australia lead the five-match series 1-0 after victory at Old Trafford on Sunday.

The fourth match takes place at Cardiff on Saturday, with the series concluding in Southampton on Monday.

England had opted to field an unchanged side from the XI that lost by 88 runs at Old Trafford, a team that included only three frontline bowlers in Steven Finn, Boyd Rankin and James Tredwell.

However, it was the home batsmen that came under pressure when Australia captain Michael Clarke won the toss and elected to field in grey, wet conditions.

With rain having delayed the start for 20 minutes, England lost opener Carberry in the first over, run out in a mix-up with Kevin Pietersen.

Pietersen set off after the ball hit his thigh and trickled into the leg side for a single that may not have been on. Carberry hesitated and, by the time he jogged through, bowler Clint McKay had gathered the ball and broken the stumps at the striker's end.

Pietersen had already hit his first ball for four, but the dismissal of Carberry prompted some uncertain strokes. Scoring only two runs from his next 16 deliveries, he was caught at square leg off the extra pace of Mitchell Johnson.

Jonathan Trott had an lbw decision from the same bowler overturned on review as he compiled an unbeaten 28, but Joe Root offered a return catch to left-arm spinner Adam Voges before the rain came.