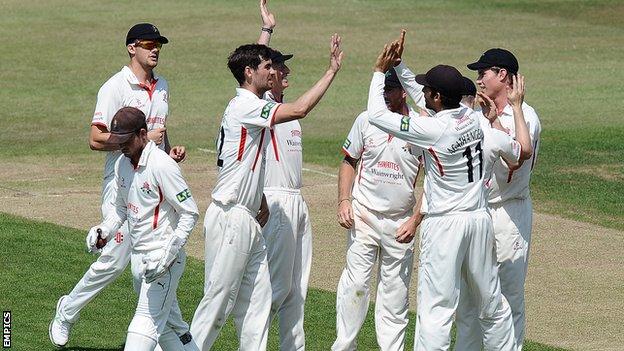 Lancashire clinched promotion back to Division One of the County Championship after they drew with Leicestershire on Saturday and Essex failed to beat Kent.

The Old Trafford outfit, who are unbeaten in the Championship all season, have secured an immediate return to the top tier with two games left to play. They need just 12 more points to be crowned champions.

Mark Chilton was the last Red Rose captain to achieve promotion back in 2005 and was also part of their Championship-winning side of 2011.

The 36-year-old assesses the key factors to Lancashire securing a return to the top flight.

Relegation came as a surprise for Lancashire in 2012, less than 12 months after they had been crowned outright champions for the first time in 77 years. The only goal for 2013 was promotion.

"The challenge for that season when you're in Division Two is that it almost feels like you're not playing for anything major. It's just a case of 'we've got to get ourselves back in that top division'.

"I remember 2005 being a bit of a stop-gap season and I'm pretty sure the lads will have felt like that this year.

"It hasn't surprised me that they've been so dominant. If you had spoken to me in April, I'd have confidently said they would have been going up, more than likely as champions.

"Clearly, in four-day cricket, they've really played very well this year. There's lots of good things happening at the club, with lots of good people involved, and over time, more often than not it will produce good results."

Six of Lancashire's eight home Championship fixtures in 2013 have been played at Old Trafford, compared with just two in 2012, following the completion of a multi-million pound redevelopment at the county's traditional home.

"I do think it's made a significant difference.

"Liverpool became a bit of a fortress for us in 2011 but having the home comforts of the new stadium, which is a fantastic facility and a lovely place to be, has probably really helped to settle the side.

"They've started to create the same feeling that we had at Liverpool in 2011, in that it becomes a difficult place to play.

"There would have been a lot of people holding their breath this summer. It was a big moment for the club because an awful lot of work had been done to get to that stage.

"To see the ground full for a Test match and a one-day international match [both against Australia] is what a lot of people have worked hard towards. They can sit back and take a great deal of satisfaction from a job well done."

With 122 Test appearances between them for South Africa and Australia respectively, Ashwell Prince and Simon Katich have brought some much-needed experience to Lancashire's batting line-up and are their top two run scorers in four-day cricket.

"Simon is probably The times I've seen him, he's looked very fluent and has scored a great volume of runs.

"I got the chance to play with Ashwell and I know what a determined performer he is.

"You're always guaranteed runs with those two guys. You'll very rarely put them into a situation that they've not played out before, so they can play lots of different roles and also complement the other guys in the team."

The evergreen Glen Chapple and the rejuvenated Kyle Hogg have both taken more than 50 first-class wickets for Lancashire in 2013, their stand-out performance coming in June when they dismissed Essex for just 20.

"After starting with successive home draws, Lancashire's campaign burst into life with a dramatic win against Glamorgan at Colwyn Bay, bowling the home side out for 139.

"Two victories against Essex, the first coming after chasing down 253 to win on the final day at Old Trafford, and then bowling Essex out for just 20 at Chelmsford, were remarkable achievements and big highlights.

"Once they picked up their first win, they never really looked back. With a trio of bowlers claiming more than 50 wickets apiece and runs coming from throughout the team, Lancashire are worthy of promotion in 2013."

"I've known Glen a long time and he looks as fit as I've seen him for a long time. The important thing for him is to keep his body in a good shape so that he can go out and demonstrate those skills.

"If you ask the majority of opening batsmen their top three hardest opponents, he will be in most people's top three. He's very well respected and

"The partnership between Glen and Kyle was a real strength in 2011, and

"Similarly to finding a good opening partnership with the bat, exactly the same thing applies with the ball.

"Where they're very strong is that they don't give much to hit. They're always testing techniques early on, always asking questions and not leaking too many runs so they're putting sides under pressure straight away.

"They obviously enjoy bowling with each other and it's proved to be an effective partnership this year."

Gary Keedy had been Lancashire's front-line spinner for much of his 18 years with the county, but his pre-season departure to Surrey has allowed Simon Kerrigan to flourish in a season that ended with him being handed a Test debut by England.

"Simon has always been an exciting cricketer - an aggressive spin bowler who is always looking to take wickets.

"His will have been up and down, but they will stand him in good stead.

"I really think he will go on to be a high-class international spinner. He's got all the attributes. When he's bowling well, he bowls people out and he wins games."

Lancashire have offered first-team chances to talented youngsters in recent seasons and 2013 has been no different, with opener Luis Reece, 23, making the most significant breakthrough.

"Luis was involved during my time and he forced his way in through the sheer volume of runs he was scoring in every form of cricket he was playing. It's very hard to ignore that.

"He's got his game organised and he's shown himself to be a consistent performer.

"I've done it myself - if you can bat a long time, see off the new ball and bat out that first session, you're setting a platform for the team to get big runs. He's done that brilliantly."