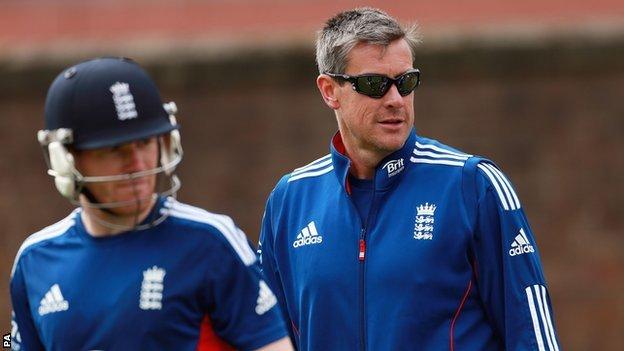 They go into Wednesday's third ODI at Edgbaston trailing 1-0 in the five-game series, after a defeat and a washout.

But Giles insisted: "This is an exciting side to come to watch."

"(There's) Kevin Pietersen, Michael Carberry is an exciting batsman at the top of the order; then Jonathan Trott, Joe Root, Morgan, Ravi Bopara, Steven Finn - there are some good names to watch. Then you have the youngsters.

"I'd hope the cricketing public would want us to bring through some of our young cricketers and expose them to what is the almost the harshest of environments, which is playing Australia."

Former England skipper Michael Vaughan, who captained Giles during their playing days, had tweeted after the squad announcement in August: "I would have only rested captain Cook. Plenty of time to rest from September 16th - November 21st? Can't sell tickets then rest five star names.

"No problems resting players but I think supporters who have paid good money to watch the best should get a small refund."

Giles responded: "It's harsh - I think it was said in haste by Michael."

England's bowling has come under criticism after only three front-line bowlers - pacemen Finn and Boyd Rankin, and spinner James Tredwell - were selected for Sunday's 88-run defeat at Old Trafford.