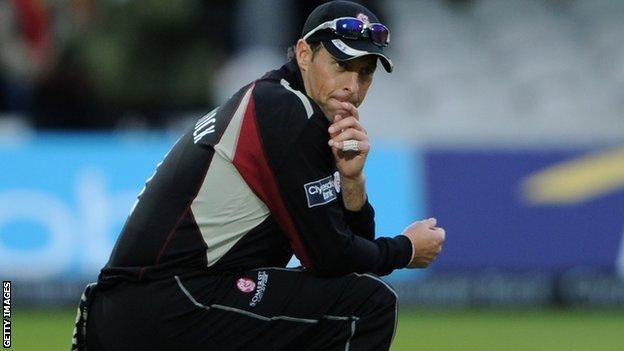 Somerset captain Marcus Trescothick has urged his players to stay positive after their YB40 semi-final defeat by Nottinghamshire on Tuesday.

They lost by eight wickets at Trent Bridge after a poor batting display.

And, with two matches left to play and sitting second-bottom of the table, they must now regroup and try to avoid relegation in the County Championship.

"We're not a bad team, but our confidence has taken a knock," the 37-year-old opener told BBC Somerset.

"You've just got to try and remain positive, and stick with things you do all the time. Hopefully then, people will find their form."

Somerset finished runners up in Championship Division One last season, but have won only two matches this term, leaving them in a relegation battle with Nottinghamshire, Surrey and Derbyshire.

Trescothick's side host bottom club Surrey this week before travelling to sixth-placed Notts for their final match of the campaign, starting on 24 September.

"There's no secret ingredient or magic spell we can wave to try and turn this around," added the former England batsman.

"But form is temporary, class is permanent. I'm sure this team can bounce back."