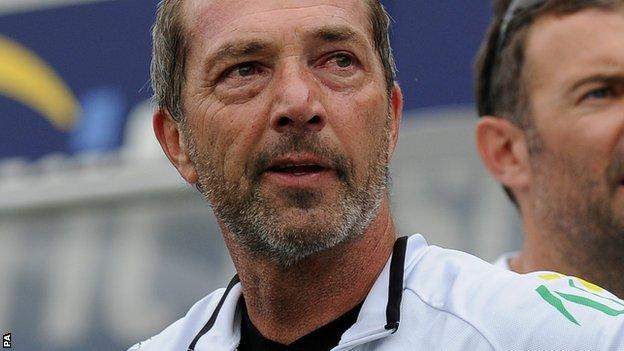 Former Glamorgan coach Matthew Maynard says he would like to return to the county one day, but not in the immediate future.

Maynard left under controversial circumstances in 2010 and suffered the loss of his son Tom in 2012.

But Maynard said the arrival of former team-mate Hugh Morris as chief executive might change his future position when family commitments allow.

"Maybe further down the line, yes, I'd like to go back there," he said.

"It will be brilliant to work again with Hugh.

"But in the immediate future the commitment of a county... I'm just not ready for it yet with the family.

"[I'll] try and look for a couple of Twenty20 jobs which will take me out of the country for a short period of time.

I don't want to commit long term to anything at this stage. I guess everyone will understand that

"But ultimately the family's got to come first at the moment."

Ex-England batsman Maynard skippered the Glamorgan side, which also contained Morris, to the County Championship title in 1997.

Morris will step down as England's managing director in January to take up the dual role of Glamorgan's chief executive and director of cricket.

And Maynard has hailed the appointment of Morris as "brilliant news" for Glamorgan.

"I know that the players in the dressing room were absolutely delighted because they know the impact Hugh can have," Maynard told BBC Radio Wales Sport.

"[He's got] huge experience, hugely respected not only in cricket but what he's also done in business.

"I think he'll get the Welsh business community back supporting Glamorgan.

"I'm sure he will, over the course of the next four, five, six years, see a good turnaround in the finances of the club as well as improved performances on the field."

Glamorgan are also looking to appoint a new head coach with Matthew Mott leaving his post of head of elite performance at the end of the current season.

Mott replaced Maynard, who resigned in November 2010 after he felt his position had become "untenable".

Former England assistant Maynard has a spell coaching in South Africa but has spent time away from the game following the death of his son Tom, which he said left his family "broken."

Tom Maynard, who left Glamorgan to join Surrey following his father's resignation, died in June 2012 after being struck by a London Underground train.

"I've got to stay involved in the game somehow," Maynard said.

"At the moment that's through Twenty20 cricket and hopefully doing a little bit of work for the ECB this winter - working with the age groups ahead of the Under-19 World Cup.

"But I don't want to commit long term to anything at this stage. I guess everyone will understand that."