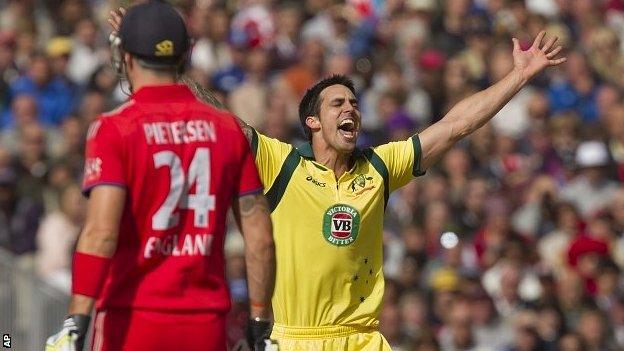 Australia fast bowler Mitchell Johnson can play a major part in their quest to regain the Ashes down under, the team's former paceman Jason Gillespie said.

Johnson, a 31-year-old with 205 Test wickets, was left out of the squad that lost 3-0 in England this summer.

But he has impressed in the limited overs series and could fill a void left by injuries to several fast bowlers.

"He could play a big role," Gillespie told BBC Sport. "He has the desire and drive to reignite his Test career."

Australia's preparations for the series down under, starting in Brisbane on 21 November, have been rocked by injury.

Young pacemen Mitchell Starc, James Pattinson and Pat Cummins are all doubtful after suffering stress fractures of the back.

And Ryan Harris, who took 24 wickets at 19.58 against England this summer, faces a race to be fit after being sidelined by a hamstring injury.

After bowling Australia to victory in Perth in the 2010-11 Ashes, left-armer Johnson was taken apart by England in Melbourne and Sydney and became a figure of fun among the touring fans as his bowling became increasingly wayward.

However, he looked back to his best in the second one-day international at Old Trafford on Sunday as he dismissed Michael Carberry and Jonathan Trott from successive balls and clocked speeds of up to 93mph.

Former England captain Michael Vaughan: "I've seen a lot of Mitchell Johnson this year and think he has got his mojo back. He has to be back on the radar for Australia Test match cricket."

Former Australia fast bowler Dirk Nannes: "A lot of people give him a lot of stick but they haven't seen him at his best. We are starting to see him bowling fast, accurate and menacing spells. He has been particularly fiery."

Gillespie, who retired in 2006 with 259 Test wickets and now coaches Yorkshire, believes Johnson is benefitting from making crucial adjustments to his game.

"I spoke to him the other night and he is leaving no stone unturned, working really hard," said Gillespie. "The Australian support staff are absolutely thrilled with how he has been coming along.

"He's reverted back to his longer run-up. He's running in slightly differently, his arms are not swinging as much and he is a bit more compact and streamlined running in to bowl.

"That is getting him into a really good position at the crease to unleash the ball. I think he is in a pretty good place and that is improving his consistency."

Following the Starc setback on Monday, Cricket Australia issued a statement from team physiotherapist Alex Kountouris to explain the spate of injuries.

He said younger bowlers - Starc, Pattinson and Cummins are all under 24 - are far more susceptible to back injuries while their bodies are still developing.

Ashes series down under

Gillespie believes fast bowlers are increasingly going to have to choose between Test, one-day and Twenty20 cricket.

Peter Siddle, the only Australia bowler to feature in all five Ashes Tests, has not played a one-day or Twenty20 international since 2010, whereas Starc, Pattinson and Cummins were involved in all three formats before breaking down.

"It's the guys who are playing all three forms of the game who are more susceptible to suffering these injuries," Gillespie added.

"Siddle has decided to make his focus the long form of the game and he seems to be able to find a way to get through.

"I think we will see more and more fast bowlers around the world who will only commit themselves to one or two forms of the game."