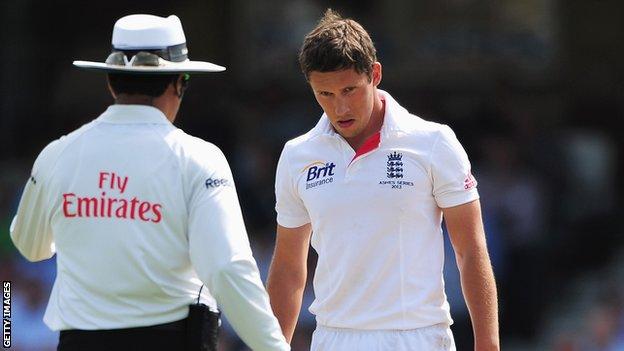 Lancashire's Simon Kerrigan is sure he can be a success at international level, despite enduring a difficult England debut against Australia.

But Kerrigan on his display at The Oval and believes he will return stronger.

"I'm my own biggest critic and I was really disappointed with how it went," he told BBC Radio Lancashire.

"You're expecting all the good things to happen and you're not really preparing yourself for something like that."

Kerrigan was rewarded for his with a and, with an England series win already secured, handed a surprise debut.

However, he in the first innings and and was not used in the second.

While the game was in progress, many pundits put Kerrigan's nightmare start down to debut nerves, but the player himself says it was a match in which things simply did not go right for him.

He continued: "The adrenaline was going and there were a few nerves, but I knew I'd be nervous because I was nervous when I made my second-team debut [for Lancashire], my first-team debut and my Lions debut.

"I tried to rely on the times where I've been nervous but also come out of the other side and done really well from that.

"It wouldn't say it was just nerves. Technically, it didn't click. That's what happens with young spinners. I'm 24, still learning my action and still learning the game."

And Kerrigan says the negatives from his tough introduction to Test cricket have all disappeared, adding: "I was feeling sorry for myself for a couple of days, but getting back into things straight away with Lancashire helped.

"[England team director] Andy Flower took me to one side [at The Oval] and said 'you are far better off having the experience you've had now rather than getting a go in four or five years, and it would be an even greater story if you bounced back from it and had a prospering Test career'.

"As long as I keep an energy about myself, wanting to get better - an experience like that drives you on to get better, get back into the side and, if you get another chance, prove what you can do."

Having struggled on his first international appearance, the Preston-born left-armer returned to Championship action with Lancashire the following week, and also hitting a maiden first-class half-century with the bat.

His current Championship wicket tally stands at 54 and a win for the Red Rose over bottom club Leicestershire later this week could be enough to seal promotion and the Division Two title, which would be another personal highlight for Kerrigan.

"If you'd said at the start of the season that all this would be happening, I wouldn't have believed you," said Kerrigan. "Playing for England was a great experience and hopefully I'll have plenty more of those experiences.

"Lancashire have got a big game this week. We want to finish as strong as we can in these last three games, so that if we are fortunate enough to go up, we'll go up as champions hopefully."