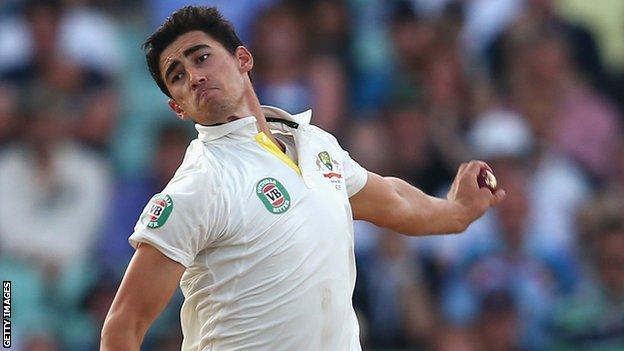 Australia bowler Mitchell Starc is set to miss the Ashes in Australia later this year because of a back injury.

England beat Australia 3-0 this summer and the return Test series starts on 21 November in Brisbane.

Starc, 23, has an early stage stress fracture of the lower back and Cricket Australia says he is "expected to be unavailable for a prolonged period".

Fellow bowler Jackson Bird also has a back problem but should be fit for the Ashes.

However, along with Starc, Australia also have fitness concerns over pacemen James Pattinson, Ryan Harris and Pat Cummins.

Pattinson, 23, was ruled out of the recent Ashes series after two Tests by a back injury, while 33-year-old Harris injured his hamstring in the fifth Test at The Oval.

Back trouble, including a stress fracture, has also been the problem for 20-year-old Cummins who has not managed another Test since his man-of-the-match debut in Johannesburg in 2011. He is also expected to miss the Ashes series down under.

Left-armer Starc played in three of the five Tests against England and was Australia's third highest wicket-taker, claiming 11 scalps at an average of 32.45.

"While it's a disappointing result for Mitch, we know he will bounce back," said Cricket Australia general manager Pat Howard.

"Starc, James Pattinson and Pat Cummins are all under 24 years of age and we are certainly well aware that until fast bowlers get into their mid-20s they are more susceptible to injury."