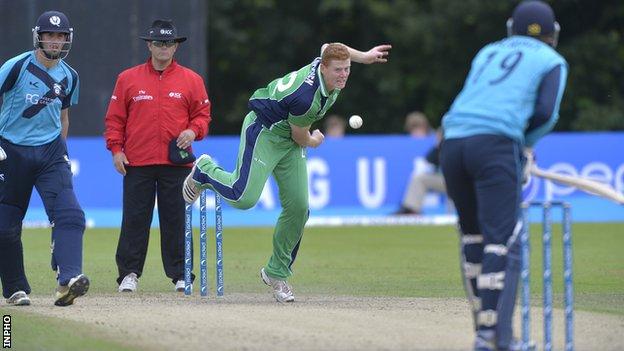 Ireland completed an ICC World Cricket League double over Scotland at Stormont with a seven-wicket win on Sunday.

The hosts won by one wicket in Friday's thriller but this was much easier after Scotland were all out for just 165.

Scotland were 127-4 before the fall of Richie Berrington for 35 triggered a collapse with the visitors losing their last six wickets for just 38 runs.

Eddie Richardson and Stuart Thompson shared the other four Scots wickets in Belfast.

Irish skipper William Porterfield was dismissed for five and Paul Stirling quickly followed before Ed Joyce (39) and O'Brien steadied the innings with a 69-run partnership.

Gary Wilson (35 not out) and O'Brien brought Ireland to the victory target with 17 overs to spare.

Scotland's hopes of automatic qualification for the 2015 World ended with Friday's defeat while Ireland had already booked the place in the tournament in Australia and New Zealand.

The Scots have another chance to progress at the World Cup qualifiers in New Zealand in January.