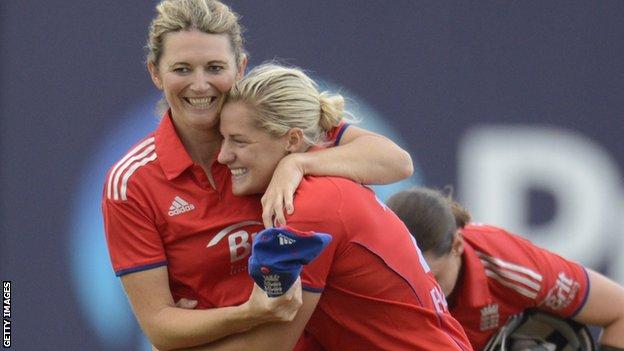 Edwards and Brunt talk about their Ashes success over Australia, the profile of the women's game and discuss their favourite format in a summer where they contested the Ashes over all three disciplines - Test, 50 over and Twenty20.

Here are their answers to your questions...

Firstly, congratulations, great job! What more can be done to raise the profile of women's cricket in this country? Catherine Payne ‏(@catkins0203)

Katherine Brunt: "I agree with Charlotte. The fact we had a full house in the Twenty20 international at Chelmsford shows where we have come from. We have gone from attracting a few hundred supporters to a few thousand. Now we want to go on from there."

Charlotte: "I love them all. But there's something special about Test cricket because it is few and far between for us. The Test match this summer at Wormsley against Australia was a very special occasion. It only comes around every two years and Test cricket is ultimately the hardest form of the game."

Katherine: "Exactly the same reasons - Test cricket because there is so little of it. But it also allows you to get involved in the game more and really get into a bowling spell where you can figure someone out. But I also love T20 because it is short and sweet - and your job is done quickly!"

Did yourselves or the Australian team receive any stick/banter from the crowd like they receive in the men's game? Stuart Eddicott ‏(@StuEddicott)

Charlotte: "I field in the ring so I didn't hear much! It was all really positive and there was a great atmosphere around the ground. The best bit was when 'Billy the Trumpet' played in the Test at Wormsley - he owned the ground for the day!"

Katherine: "Being a boundary rider I think it's always playful and encouraging. It keeps you going and alive and interested in the game. The fans are good at supporting us. Talking about the trumpet fella, he started singing at the beginning of one of my bowling spells and all the crowd stopped to listen. It really fired me up and made me bowl harder than I had throughout the whole Test."

What was your personal highlight of the Ashes this year? Chloe Harwood ‏(@ChloeSophia155)

Charlotte: "It has to be the moment when we regained the Ashes at Southampton. Running onto the pitch when Lydia Greenway hit the winning runs is a moment I'll never forget. Running on with some of your best mates, all enjoying that success together and the celebrations that night in the dressing room will live with me for the rest of my life. Heather Knight's 150 in the Test should not be forgotten, but the most recent moment of winning is the most special."

Has your Ashes success received the coverage it deserves? Jason Craig ‏(@JasonCraig120)

Charlotte: "I've been astounded by coverage we've had. We have won World Cups in the past but arguably earned more coverage from winning the Ashes this summer. We were overwhelmed by the support and media coverage we've received. The whole summer was about Ashes fever and, once the men won, it was on to us. It really spurred us on as a team."

Katherine: "Playing in front of that full house in the T20 at Chelmsford, you could feel the atmosphere, and knowing the men weren't coming on after you was the best part. The crowd were there to watch us, support us and join in with our success. So for me the amount of coverage is going down the right path."

What do you hope your Ashes success will do for the women's game? Jason Craig ‏(@JasonCraig120)

"Apart from that slip-up at Lord's, it has been a nearly faultless performance by England in this Ashes series. Australia need to go and get some things sorted out."

Charlotte: "Most importantly, it will inspire many girls to pick up a bat and hopefully they will have female role models now. We want a huge rise in participation through this - this is as important to us as winning the Ashes."

Katherine: "We're all ambassadors for the sport and try to promote it as much as we can. Sometimes it can be as easy as just winning a game of cricket. Hopefully we have reached out to a lot of girls around the country by winning the Ashes."

Who inspired you as a youngster? Bryan Edwards (@BryanEdwards12)

Charlotte: "My dad did - he played at our local club in Cambridgeshire and was the reason I played cricket. My brother and uncle too - family were always the people who inspired me first - then role models like Graham Gooch and Ian Botham."

Katherine: "I was inspired by what I saw on the television - watching someone run in fast and bowl as quick as they could. In terms of female role models, I remember going to watch my first game at Headingley and seeing (retired England international) Nicky Shaw play - she was a quick bowler then. That's my first memory - I never really followed women's cricket. My inspiration of women's cricket was when once I joined the England team as a 19-year-old."