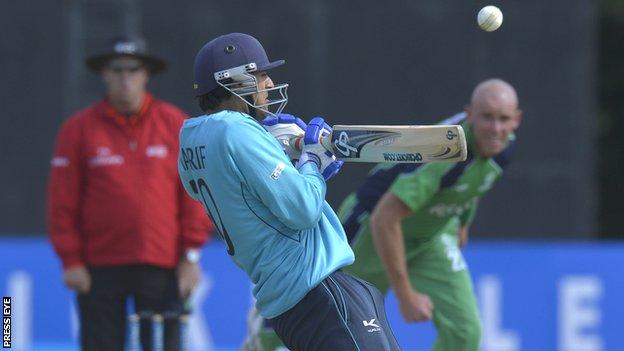 The visitors posted 223-9 in their 50 overs with George Dockrell taking four wickets for the Irish, who had already qualified for the 2015 tournament.

Majid Haq claimed three wickets as Ireland were reduced to 146-7.

However, Max Sorensen hit 31 before Tim Murtagh's four off the penultimate ball gave the hosts victory on 225-9.

Scotland needed to beat Ireland in the World League games on Friday and Sunday to retain hopes of qualifying automatically for Australia and New Zealand.

They have another chance to progress at the World Cup qualifiers in New Zealand in January.

Stand-in skipper Preston Mommsen top-scored for the visitors with an unbeaten 91, while Dockrell took 4-24 and Sorensen 2-37.

Ireland, who were aiming to bounce back from Tuesday's defeat by England, were cruising with William Porterfield and Paul Stirling putting on an opening stand of 95 - but the hosts collapsed with seven wickets falling for 51 runs.

Sorensen's impressive knock gave Ireland hope and Murtagh took his total to 23 when he hit the winning runs.