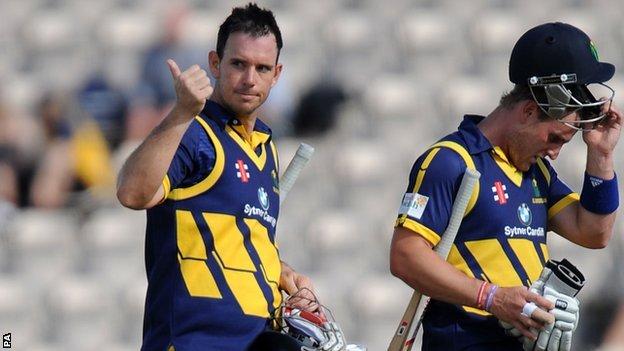 Jim Allenby played the starring role as Glamorgan upset YB40 holders Hampshire at Southampton to earn their place in a first Lord's final for 13 years.

All Glamorgan's batsmen reached double figures in a healthy score of 234-4.

But the key contributor was Allenby, who made an unbeaten 74, sharing an unbroken fifth-wicket stand of 84 with Ben Wright (47 not out).

Hogan's one of the heroes

The Australian all-rounder then took 2-18 in eight miserly overs as Hampshire fell short on 203-8 to lose by 31 runs.

The hosts, victorious off the final ball to beat Warwickshire in the final a year ago, had won all their six previous completed List A matches against Glamorgan, an unbeaten run dating back to 2005.

But the underdogs ripped up the formbook, running out comfortable winners over a Hampshire side for whom long-serving former England one-day international Dimitri Mascarenhas was playing his final game.

In what will be his final act as coach, having not had his contract renewed, Matthew Mott's side will now face the winners of Monday evening's second semi-final between Nottinghamshire and Somerset at Lord's on 21 September.

It will be Glamorgan's first trip to St John's Wood for a one-day final since being beaten by Gloucestershire in the 2000 Benson & Hedges Cup - and only the third in their history, having twice ended up losers.

Glamorgan's progress had been unremarkable until the last four overs when they called a belated powerplay, allowing Allenby and Wright to smash 57 off Chris Wood and Sohail Tanvir.

Hampshire immediately missed the big-hitting of England squad opener Michael Carberry and, despite making a healthy enough start with 40-0 from the first eight overs, soon began to fall behind the run rate after the loss of James Vince.

There was still hope with his fellow opener Adams at the crease but a mix-up over a possible single led to the dangerous Neil McKenzie being run out.

And, although Adams and Ervine each passed 50, the required rate rose to above 10 an over.

Hogan, who has been such an inspirational signing this year, then finished Hampshire off when he came back for his final spell.

He held a return catch to dismiss Adams, induced Ervine to offer a catch to Graham Wagg at long-on and then tempted Liam Dawson to hit to Wright at midwicket.