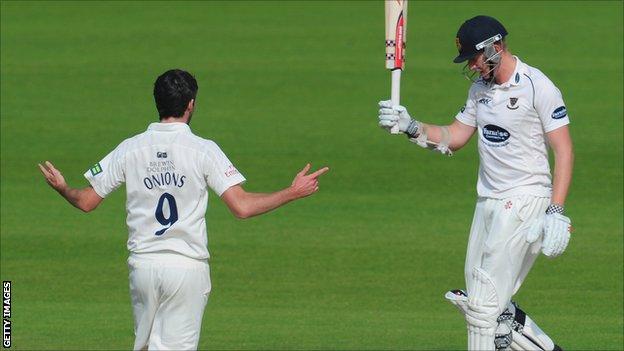 Durham bowler Graham Onions is to play for the Dolphins franchise in South Africa over the winter, if he is overlooked for England selection.

Onions, 30, caught the eye of the KwaZulu-Natal region club with his form for Durham, which has yielded 51 wickets in nine Championship games.

England called the Gateshead-born paceman into their squad for the home Ashes series, but he did not play.

"I hope to be able to contribute," Onions told Cricket South Africa.

"I am absolutely delighted to have signed for the Dolphins and am looking forward to playing in South Africa, which is renowned as having one of the strongest domestic set-ups in the world.

"My availability will obviously depend upon England selections."

The seamer has been key to Durham's pursuit of the County Championship title this season, which was boosted by Thursday's success inside three days against Sussex.

Alongside academy talent Usman Arshad, Chris Rushworth and Kent-bound Mitch Claydon, who only returned from loan after injury to several bowlers, Onions helped bowl Sussex out for 112 and 116 in their two innings to set up victory.

"Usman is a special talent, who can swing the ball both ways and looks very, very handy," captain Paul Collingwood told BBC Newcastle.

"He can take wickets and bats well and is surprising a few people at the moment. We always seem to have some people who can come in and put their hand up for us.

"[Chris] Rushworth was very unfortunate not to get a wicket in this game. He probably deserved a five-for but only got the one, but he builds a lot of pressure from his end.

"Bunny [Onions] probably didn't bowl that well but has taken five wickets and sometimes that happens."