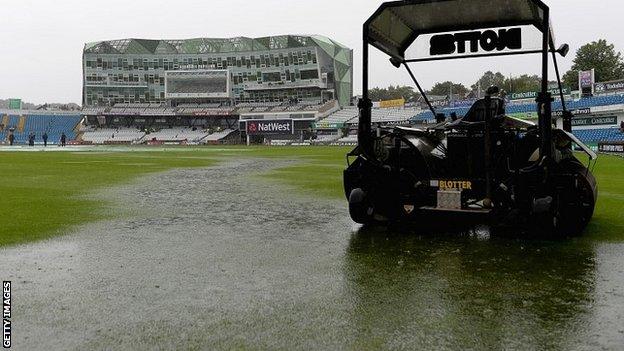 The first one-day international between England and Australia at Headingley was abandoned without a ball being bowled.

Heavy rain throughout the morning left puddles on the outfield and the umpires called the game off at 13:30 BST.

The two sides will hope for better weather in the second game of the five-match series at Old Trafford on Sunday.

England will be captained by Eoin Morgan in the absence of regular skipper Alastair Cook, who has been rested.

Batsman Kevin Pietersen is back with the squad after missing the drawn Twenty20 series but James Anderson, Stuart Broad, Graeme Swann and Ian Bell have also been given time off following the Ashes, which England won 3-0.

Australia have included Aaron Finch, who hit 14 sixes and 11 fours in 156, the highest international Twenty20 score, in the first T20.

Pakistan-born leg-spinner Fawad Ahmed, who made his ODI debut in Tuesday's 200-run win over Scotland, and Josh Hazlewood, a fast bowler who made his debut in 2010 as a 19-year-old but has not featured for three years, are also in the squad.