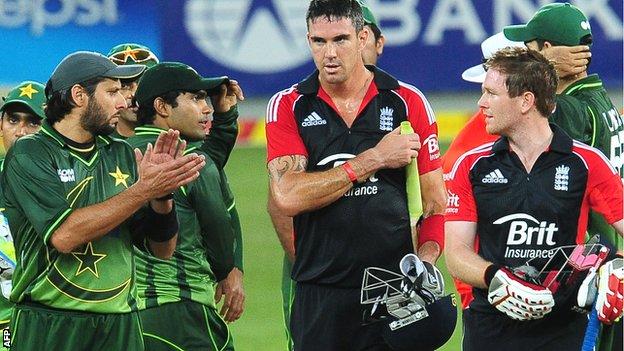 Acting captain Eoin Morgan is relieved Kevin Pietersen is part of the England squad for the five-match one-day series with Australia starting on Friday.

"Kev offers a hell of a lot as a senior player and as a batsman," Morgan said.

"He leads by example, the confidence in which he goes about his business. People rub off on it and it's crucial."

Pietersen, who has scored 4,369 one-day international runs at an average of 41.60, played the last of his 132 ODIs in India in January, and missed the Champions Trophy this summer because of a knee injury.

England reached the final of that competition, losing to India in a rain-reduced final at Edgbaston, and remain without a global one-day title.

"We've got a young, talented, exciting team playing in this series and it can be a stepping stone looking ahead to the 2015 World Cup," Morgan said.

"This series in particular is going to be a hard-fought series for both sides and really exciting at the same time."

With Cook and Bell absent, Pietersen could be asked to reprise his role as an opener; he averages 58 from eight matches at the top of the order.

The 33-year-old last opened against Pakistan in Dubai in February 2012 when he made 130, his highest ODI score.

"It's certainly an option," said Morgan. "Kev's opened the batting for England before and done well.

"He also bats in the middle order as a very explosive player. He's very versatile in that regard so we'll be looking at both options."

Morgan, 26, is fully fit after surgery on a broken finger and struck an unbeaten 124 in a record fifth-wicket stand of 226 with Ravi Bopara to lead England to six-wicket win over Ireland on Tuesday.

He played the last of his 16 Tests in February 2012 but has not given up hope of a place in the Test squad for the Ashes tour of Australia later this year.

"At this stage of the summer I'm taking every innings as an opportunity to score runs and to prove what I'm capable of doing," he said.

"And if that opportunity arrives at the end of the summer I'd be a very happy man."

Recently eligible Pakistan-born leg-spinner Fawad Ahmed, who made his ODI debut in Tuesday's 200-run win over Scotland, and Josh Hazlewood, a fast bowler who made his debut in 2010 as a 19-year-old but has not featured for three years, are also in the squad.