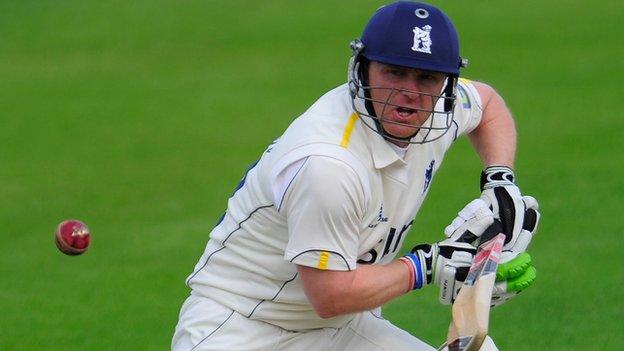 Batting with a runner, the 39-year-old made a gritty 65 as the Bears batted all day against Nottinghamshire.

What's riding on this game?

Backed by 63 from in-form Laurie Evans and, at one time partnered by teenager Peter McKay, who was also batting with a runner, Maddy saw the Bears to 271.

That set Notts 211 to win on the final day to ease their relegation fears.

Judging by the weather forecast for Friday, the expected day of rain looks favourite to have the final word in this contest.

But, if Trent Bridge were to escape the forecast deluge and Notts were to enjoy a successful run chase, that would then drag Dougie Brown's injury-ravaged Bears into the relegation picture.

At the other end of the age scale, 18-year-old Warwickshire wicketkeeper McKay has also had a game to remember.

On his first-class debut on Tuesday, as stand-in for the injured Tim Ambrose, he turned his ankle, had to bat with a runner (making an impressive 33) and has so far been unable to keep wicket, making way for two temporary replacements.

But, when he came in to bat with the Bears eight down in their second innings, he joined Maddy, who had also been forced to bat with a runner after sustaining a calf injury on Wednesday.

With four batsmen out in the middle, the pair put on 30 before Maddy, making probably his final first-class appearance, became the second of the two LBW decisions with which Fletcher wound up the Warwickshire innings.

Evans continued his fine recent run of scores before fending Harry Gurney off into the hands of James Taylor and Steffan Piolet made his highest first-class score of 30 before holing out off Fletcher.

"Another absorbing day saw Chris Read deservedly enter the county's record books as holder of the most catches for Notts - and also saw another career step taken by Luke Fletcher.

"The 6ft 6in fast bowler, nicknamed the 'Bulwell Bomber' by home supporters, claimed his best innings and best match figures as he picked up his second consecutive five-wicket haul.,

"If the gloomy weather forecast for the final day has been grossly exaggerated, we could be in for a thrilling conclusion to this contest."