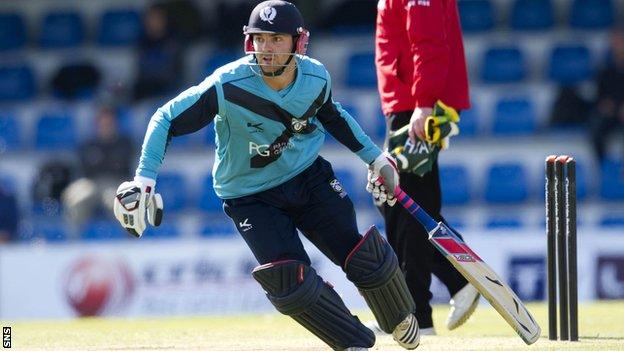 Stand-in skipper Preston Mommsen says Scotland will focus on automatic qualification for the 2015 World Cup rather than dwell on their one-day international defeat by Australia.

The top two sides will qualify automatically for the 2015 World Cup, with Scotland currently in fourth.

"That's the real acid test to see exactly where we are," Mommsen said.

Although Ireland have already sealed qualification for 2015 as they are guaranteed to finish top of the group, Peter Stiendl's Scotland team need to win both matches at Stormont to retain any hope of automatic qualification.

We still believe we are strong enough to take them down

"We can still take a lot of confidence into the Irish games," said Mommsen. "We need some perspective on this match. We are still an associate cricketing nation and Ireland are too.

"They have been nudging ahead in recent years, but we still believe we are strong enough to take them down.

"The two games over there are our main focus and count for more."

If Scotland fail to qualify automatically, the bottom six teams of the eight-team Championship receive another chance to progress at World Cup qualifiers in New Zealand in January.

There they would compete alongside Hong Kong, Nepal, Papua New Guinea and Uganda for the final two spots in the ICC's flagship 50-over event.

Mommsen stood in as captain for the visit of Australia, in place of Kyle Coetzer who had a wrist injury.

Centuries from Aaron Finch and Shaun Marsh helped the tourists claim an emphatic 200-run win at The Grange.

On Tuesday, centuries from Eoin Morgan and Ravi Bopara gave England a six-wicket victory over Ireland in Dublin.