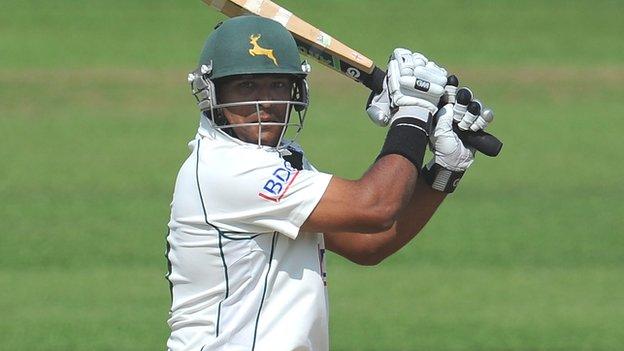 Samit Patel's 18th first-class century tilted the balance of power at Trent Bridge to put Nottinghamshire in charge on day two against Warwickshire.

He shared a stand of 101 with Riki Wessels (77) for the sixth wicket before Andre Adams weighed in with 46 off 26 balls as Notts totalled 359.

Both Bears openers then went cheaply as the weakened visitors closed on 27-2.

That leaves the reigning county champions still 34 in arrears with eight wickets intact going into the third day of a clash which could yet turn into a 'loser goes down' contest.

What's riding on this game?

With teenage debutant Peter McKay still absent after suffering ankle ligament damage while batting the previous day, the injury-ravaged Bears summoned their third wicketkeeper of the match, Jamie Atkinson, to deputise behind the stumps.

There was also joy for the recalled Steffan Piolet, who earned only his second County Championship wicket in his first match for three years.

For Notts, Wessels had a good day, passing fifty for the first time this season.

Due to be replaced by James Taylor for the second half of the match, Wessels made the most of his limited appearance time and seemed well set for three figures himself until run out by a direct hit from Woakes at cover.

But Chris Read's batting woes continued, the Nottinghamshire skipper, with just one half-century this term, faced 26 deliveries without scoring, before steering Maurice Chambers into the hands of point.

Loanman Chambers was the pick of the visitors' attack, finishing with 4-79, to follow his five-for on his debut against Sussex at Edgbaston last week.

"Weather permitting, this match looks certain to produce a positive result which would leave the vanquished team looking nervously at the relegation zone going into their final two games.

"Warwickshire have it all to do after their bowlers worked hard but threatened only sporadically allowing Notts to establish a significant first innings lead.

"The Bears might be giving their former coach Ashley Giles a call and suggesting he recalls Samit Patel to the England one-day squad as the all-rounder keeps scoring runs against Warwickshire. This innings was majestic."