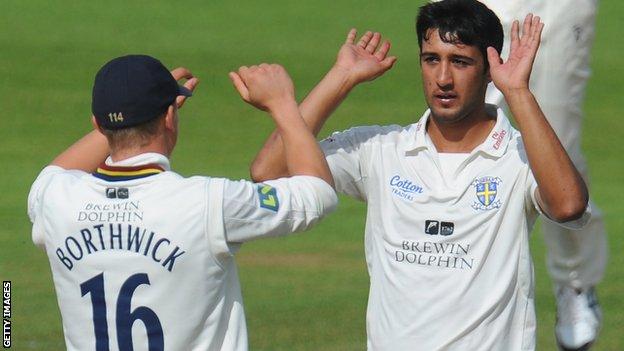 Durham reasserted their title credentials with an impressive bowling display on day two against Sussex.

The visitors were rolled over for just 112 at Chester-le-Street, their lowest Championship total for four years.

The pair shared a workmanlike stand of 93 after Sussex seamers Steve Magoffin, James Anyon and Lewis Hatchett had responded to their side's flimsy batting display by reducing Durham to 90-5.

And, although skipper Collingwood fell lbw to opposite number Chris Nash's off-spin, the partnership guaranteed that third-placed Sussex will face a big fourth-innings run-chase for victory in a game they badly need to win to boost their chances of winning the title.

A positive result, one way or the other, is guaranteed barring an intervention by bad weather.

But Sussex will need a major improvement by their inexperienced batting line-up on a pitch which has seen 26 wickets fall on the first two days.

Having resumed on 60-3, they never came to terms with the Durham attack.

Ben Brown's unbeaten 21 proved to be the highest score in an innings which ended with the last three wickets going down in the space of eight balls as Will Beer, Magoffin and Hatchett all went for ducks.

"Durham put themselves in a strong position on day two, with Sussex already facing the prospect of having to produce a record run chase at Chester-le-Street.

"Sussex's 112 all out was their worst Championship performance in four years, but Durham looked at one stage like they would have struggled without their first innings lead of 133. They were 116-5 at tea before a timely partnership of 93 from Paul Collingwood and Phil Mustard.

"With the third day under threat from the weather, Durham will have to try and things up early and claim top spot."