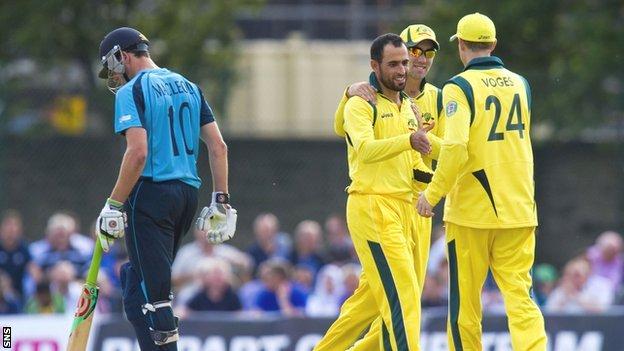 Centuries from Aaron Finch and Shaun Marsh helped Australia claim an emphatic 200-run win over Scotland in their one-day international.

The tourists showed little mercy in a sunny Edinburgh as they smashed their way to 362 for three.

Scotland could only muster 162 all out in reply at the Grange as Matt Machan top-scored with 39.

Darren Lehmann's Australians start a five-match series with England on Friday at Headingley.

It wasn't easy out there. It was a tricky wicket, they bowled well and I had to work hard

Having lost a third consecutive Ashes series with a 3-0 defeat before sharing the two Twenty20 clashes that followed, the Aussies were looking for a morale-boosting victory.

And the side currently ranked second in the ICC's one-day rankings were never in danger of losing as their top-order batsmen secured an easy win that Marsh suggested had still been a useful trip north.

"It wasn't easy out there," he said. "It was a tricky wicket, they bowled well and I had to work hard.

"It was definitely a worthwhile exercise - 100%. The boys got time out in the middle, the bowlers bowled well and it was a great spectacle. It's great to come up to a lovely place like Edinburgh."

Finch had continued on from his record-breaking Twenty20 knock of 156 against England last week by grabbing his maiden 50-over century.

The Victoria batsman struck 14 sixes in his world-record score against England on Thursday in Southampton and this time hit 148 from only 116 balls before being caught in the deep by Freddie Coleman off Majid Haq.

He and March had put on 246 for the opening wicket - an Australia record - and the latter then took up the scoring responsibilities by pushing beyond Finch's figure to end on 151 as Iain Wardlaw tempted him to slog into Gordon Goudie's grasp.

The same combination accounted for Shane Watson on 37 as the Scots claimed their second wicket in as many balls, but the Australians already had 347 on the board.

Michael Clarke (four) and George Bailey (10) batted out the final two overs to set up an improbable run chase.

Coleman fell for a duck early before Hamish Gardiner went for a single, while Watson ran out Scotland skipper Preston Mommsen for eight.

Machan and Calum MacLeod (24) helped add a touch of respectability to the score before Haq (25) eventually prodded Scotland into three figures.

With little to lose, Scotland continued to let their shots go and Goudie (23) raised a couple of cheers with two huge sixes.

However, Mitchell Johnson (four for 36) cleaned bowled Gordon Drummond for eight to claim his fourth wicket and end a painful day for the hosts.