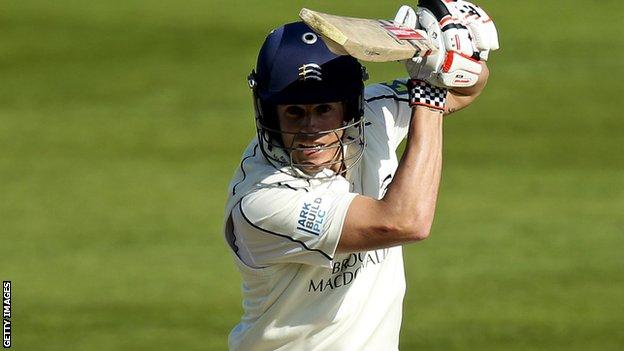 Neil Dexter led Middlesex's recovery from 24-2 to close day one on 280-7 against Surrey at The Oval.

Skipper Chris Rogers (55) shared a 93-run stand with Dawid Malan (61) before the Australian Test opener was run out.

The visitors lost three more wickets as Dexter snuck to his 50 from 128 balls, closing on 77, with James Harris seeing out the final 45 minutes alongside him.

Club captain Dexter's innings allowed Middlesex, who must win their last three matches to have any chance of taking the County Championship title, to shade the opening day despite the best efforts of veteran left-arm spinner Gary Keedy, who took 3-61.

Surrey, who are currently second-bottom, had Stuart Meaker back from a three-month knee injury but it was early strikes from Jade Dernbach and Tim Linley that gave them an excellent start - Dernbach had Robson caught behind in the second over before Denly edged to slip.

But Rogers and Malan fought back faultlessly until the first over after lunch when Dernbach fielded at mid-off and comfortably ran out non-striker Rogers.

Malan was then dropped at slip when on 59 but his reprieve was short-lived as he edged Linley to Zander de Bruyn shortly after.

The first over after tea then saw Keedy tempt John Simpson into a sweep and he was caught at short-leg before Gareth Berg and Ollie Rayner edged to the wicketkeeper and slips respectively.

"Both sides will feel the opening day could have been better and it could have been worse. Honours even as Middlesex batted with patience in the face of some disciplined Surrey bowling.

"Middlesex were flying at lunch with Chris Rogers and Dawid Malan at the crease before Jade Dernbach ran Rogers out immediately after lunch.

"Gary Keedy, a late replacement for the injured Zafar Ansari, bowled a fine spell of left-arm spin but Neil Dexter showed admirable concentration and technique to lead Middlesex to stumps."

"Having won the toss, Middlesex would have been concerned at 24-2 but Chris Rogers and Dawid Malan prevented another collapse after struggles with the bat in recent weeks.

"Surrey claimed wickets at crucial moments to keep the visitors in check, with Gary Keedy taking three scalps and spin already having a big say.

"Neil Dexter is unbeaten on 77 and the club captain will be key to see how far Middlesex can progress with the bat on day two."