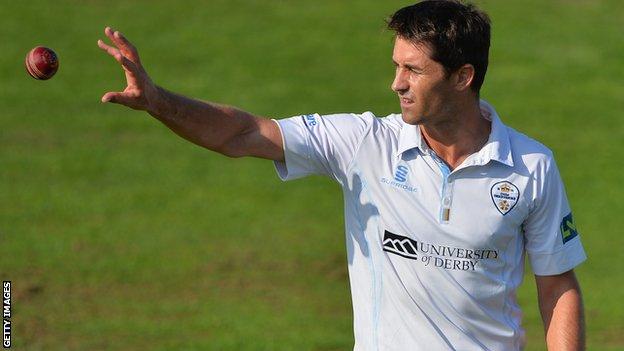 Somerset endured a miserable opening day at Taunton as they were hustled out for just 103 before Derbyshire built a healthy lead at Taunton.

The hosts were 25-0 when paceman Mark Footitt dismissed Marcus Trescothick to spark a spectacular collapse.

Another bad day for Somerset

Having stumbled to 127-5, with Chawla removing the top three batsmen on his way to figures of 4-87, the pair ensured the visitors finished the opening day in control.

Following an impressive innings victory against Middlesex last week, Somerset would have been hoping for another positive performance against bottom club Derbyshire and made a solid start having won the toss and elected to bat.

But Footitt had captain Trescothick caught by Wayne Madsen and Nick Compton, Chris Jones, Craig Kieswetter and James Hildreth all fell cheaply to leave them in deep trouble.

Only a late flourish by Chawla, who hit five fours in his 29-ball innings, took Somerset past 100, but the India all-rounder was one of only two batsmen to reach double figures as they posted their second-lowest total of the season.