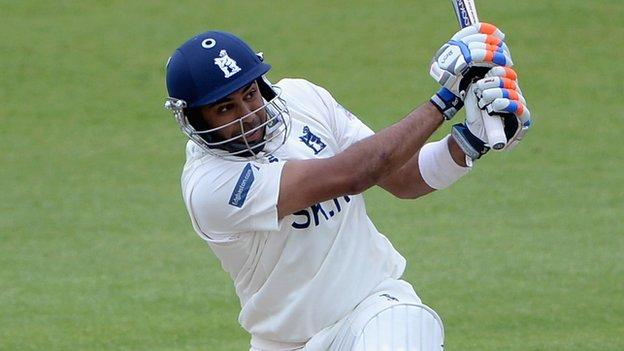 Jeetan Patel was the tail-end mainstay at Trent Bridge as Warwickshire fought back well to end the first day on top against Nottinghamshire.

The Bears looked in some bother when they slumped to 136-6, despite 76 from stand-in skipper Varun Chopra.

Still without injured captain Jim Troughton, Warwickshire again made a string of changes.

Read homes in on record

Having this time been allowed to recall Chris Woakes following England duty, they also brought back Steffan Piolet from his loan with Sussex as well as giving McKay his debut in place of the injured Tim Ambrose.

It was a first Championship start of the summer for Piolet, who missed out for Sussex at Edgbaston last week as the terms of his loan agreement did not allow him to play.

Teenager McKay had a mixed first day in first-class cricket, suffering a twisted ankle which hampered the 18-year-old when batting, forcing him to call for a runner, which made his part in an 88-run ninth-wicket stand with Patel all the more impressive.

When it came to keeping wicket, Warwickshire then had to request help from Notts who allowed their own second XI keeper Matt Cross to deputise for the injured McKay.

As for Notts, their two best performers were Andre Adams and Luke Fletcher, who each claimed four wickets.

After a season dogged by injuries, Adams was arguably back to something resembling his best, proving the chief beneficiary of Warwickshire's afternoon malaise.

He finished with 4-77, to take his career haul to 299 first-class wickets for Notts, while Fletcher weighed in with 4-56, reaching 150 in first-class cricket in the process.

"Nottinghamshire again threw away a promising position to end the day on the back foot.

"Having reduced an under-strength Warwickshire line-up to 136-6, midway, through the afternoon, they allowed the visitors' tail to wag impressively.

"Then the final five overs of the day provided a familiar story - a top order collapse. This is becoming all-too-frequent and the championship table is beginning to cause concern. The Trent Bridge patrons have again gone away unhappy."

"One loose shot by an otherwise impressive Varun Chopra instigated a flurry of wickets that left Warwickshire in real bother at 136-6.

"But Jeetan Patel's excellent season continued as he again contributed valuable runs. His unbeaten 66 was an innings of well-controlled aggression as Warwickshire's last four partnerships more than doubled the score.

"With pace bowler Maurice Chambers again leaving observers wondering why he was languishing in the Essex Second XI, the Bears will believe their attack can stay on top on day two as they search for the victory which would end any remaining relegation fears."