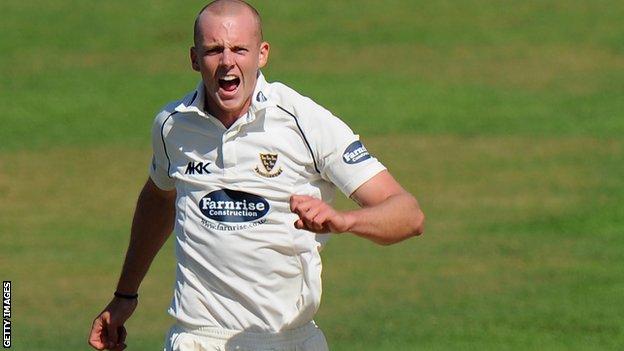 Title-chasing Durham endured a tough opening day as they were bowled out for 245 by Sussex at Chester-le-Street.

The left-armer sent back opener Mark Stoneman for 96 and made short work of Paul Collingwood and Phil Mustard.

Durham only managed one batting point, but Graham Onions picked up two wickets in reply as Sussex closed on 60-3.

With leaders Yorkshire not playing this week, Durham only need six points to move to the top of the table. And, with Onions back in the side after three weeks on the sidelines with a broken finger, they are looking for an eighth victory of the campaign.

Sussex were without Ed Joyce, Luke Wright and Chris Jordan because of international commitments, but they had plenty of incentive to perform, as they began only 23.5 points behind the home side in third.

Keaton Jennings and Scott Borthwick departed cheaply, but Stoneman looked set to make Sussex pay for a let-off on 44, when he was dropped at slip by teenage debutant Harry Finch.

From 154-3, however, they slumped to 170-6 as Hatchett produced an inspired burst. And, although Will Smith (32), Michael Richardson (31) and Usman Arshad (30) made useful contributions, Durham were all out in the 72nd over.

Onions conceded early boundaries as he tried to find his line, but hit back by removing Chris Nash for 19 and Michael Yardy for a third-ball duck.

Mitchell Claydon, who has announced that he will leave the county at the end of the summer, marked his return from a loan spell with Kent by bowling Joe Gatting for 16.