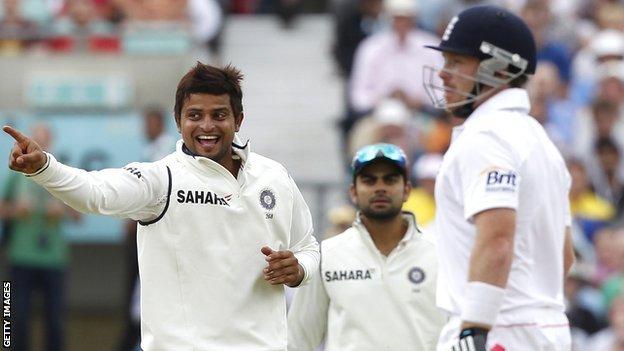 England have announced the itinerary for India's tour next summer, with Test matches at Trent Bridge, Lord's, Southampton, Old Trafford and The Oval.

It will be the first time India have played a five-Test series in England since 1959.

After the Tests, there will be five one-day internationals and a Twenty20 international, finishing in September.

England will also play Tests against Sri Lanka at Lord's and Headingley after five one-dayers and one T20 game.

The Sri Lanka Tests will take place in June, avoiding a clash with the Indian Premier League.

In recent years touring sides have frequently fielded weakened teams when Tests have been played in May at the same time as the big-money Twenty20 league has been taking place.

Venues were allocated for the 2014 internationals several years ago.

The Test at Southampton - the second to be staged at the Ageas Bowl, which is currently undergoing redevelopment - is "subject to confirmation following a final facility inspection".

By the time they arrive at Trent Bridge for the first Test in July 2014, India will have already met England in eight Tests, 16 ODIs (including the Champions Tropny final) and five Twenty20 internationals (including a World Twenty20 group match) within the past three years

The ODIs against India will be held at Bristol, Cardiff, Trent Bridge, Edgbaston (which will also host the T20 international) and Headingley.

India will also play three-day warm-up games against Leicestershire and Derbyshire and a 50-over match with Middlesex.

England and Wales Cricket Board chief executive David Collier said: "The length of the series reflects the iconic status which contests between these two great cricketing nations now enjoy.

"We thank the BCCI [Indian board] for their support and also our international venues who between them helped bring a record number of spectators - more than 850,000 - to international cricket over the course of the season when India last toured here in 2011."

England won the Test series 4-0 that year on the way to becoming the number one-ranked side in the world, and took the ODI series 3-0.

Last year, new captain Alastair Cook led England to a 2-1 Test series win in India, although India won the ODIs 3-2 in January, and then beat England in the ICC Champions Trophy final at Edgbaston in June.

20 May: Twenty20 international, The Oval