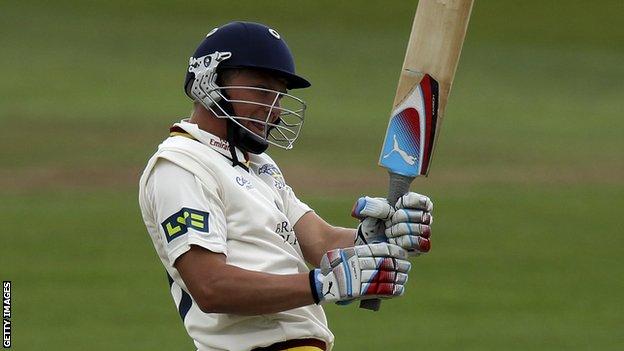 Durham beat title rivals Yorkshire by seven wickets to give themselves a great chance of claiming a third County Championship title in six years.

Resuming on 276-1, Yorkshire lost their last nine wickets for 143 as Chris Rushworth, Ben Stokes and Scott Borthwick picked up three scalps each.

Kane Williamson (97) and Phil Jacques (152) both fell quickly as the Division One leaders were bowled out for 419.

Set a target of 121, Borthwick then hit 65 to help his side to a thrilling win.

The victory means Durham are now just 5.5 points behind Yorkshire having played a game less than their title challengers.

When Jaques and Williamson strolled to the crease after sharing an unbroken stand of 257 on day three, Durham would not have expected to pick up wickets as easily as they did.

But Stokes struck in just the fourth over of the day as he had Williamson caught by Will Smith just three short of his century.

Jacques then edged Stokes behind in his next over to leave Yorkshire 284-3.

Wickets continued to fall at regular intervals despite, resistance from England batsman Johnny Bairstow (34) and Liam Plunkett (42), before Borthwick removed Jack Brooks for nought to end the innings.

Mark Stoneman fell first ball to Ryan Sidebottom, but Borthwick's fine knock, which included 12 fours and a six, took the pressure off before he was bowled by Adil Rashid.

But with just 18 more needed, Smith (27 not out) and Stokes (11 not out) eased their side to a seventh win of the season.