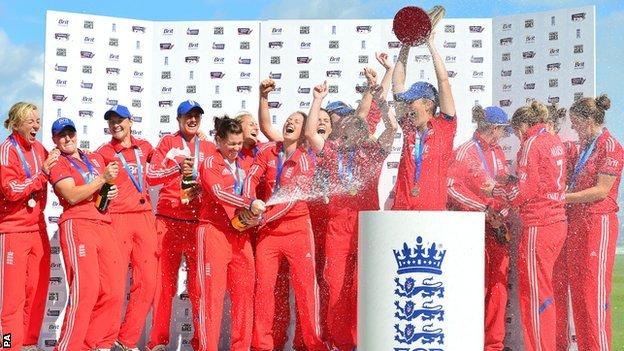 England beat Australia by seven wickets to win the third and final Twenty20 international and wrap up a 12-4 points victory in the Women's Ashes series.

Durham-born spinner Danielle Hazell took 2-20 as Australia were restricted to 91-7 at Chester-le-Street.

"Apart from that slip-up at Lord's, it has been a nearly faultless performance by England in this series. Australia need to go and get some things sorted out."

England were already assured of winning the multi-format series.

After the Test match was drawn and Australia won the first one-day international at Lord's, England have recovered with five ODI and T20 wins in succession.

And it was another assured batting performance by Kent left-hander Greenway - who had hit 80 not out two days previously when the Ashes were regained at Southampton - which was key to England's victory, her 35 coming from 34 balls after the top three fell cheaply.

Player of the series Heather Knight was caught behind - and helped off with a suspected hamstring injury - wicketkeeper Sarah Taylor spooned a catch to mid-wicket and captain Charlotte Edwards chopped teenage pace bowler Holly Ferling onto her stumps.

But that brought Greenway together with Sciver, playing only her ninth international match, and once the singles started flowing, the result never looked in doubt.

Brunt set the tone by trapping Elyse Villani lbw in the first over and then running out fellow opener Alyssa Healy with a direct hit from deep cover.

Meg Lanning (32) took the Southern Stars past 50, but was caught behind off Danielle Wyatt's first ball, and that sparked a succession of wickets as Hazell bowled Alex Blackwell and Ellyse Perry in the same over.

Their departure meant the tourists never looked like posting a competitive total, despite a late flurry by Erin Osborne (15 not out), and England rounded off their international season in style.