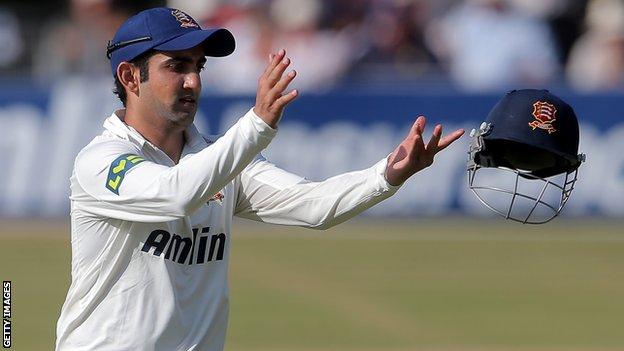 Gloucestershire avoided the follow-on thanks to a 78-run 10th-wicket stand, before a Gautam Gambhir century helped Essex declare on 285-4.

Graeme McCarter and Craig Miles (50 not out) took the hosts to 254 all out - avoiding the follow-on by three runs.

A 201-run opening partnership between Gambhir (106) and Jaik Mickleburgh (86), and a bludgeoned 40 from 25 balls by Greg Smith, put Essex in control.

Bad light then ended play early with the home side 19-0 chasing 422 to win.

But McCarter was gone two balls later when the pair attempted a second run and Reece Topley claimed his second run out of the innings.

Gambhir, ably supported by Mickleburgh, then set about justifying his reputation as one of the world's premier batsmen after what has been a difficult start to his Essex career.

His hundred included 12 fours and one six as the 200 came up at four runs per over.

First-innings centurion Smith then provided some fireworks to put the visitors firmly in control, before the umpires eventually called time after persistent bad light delays.