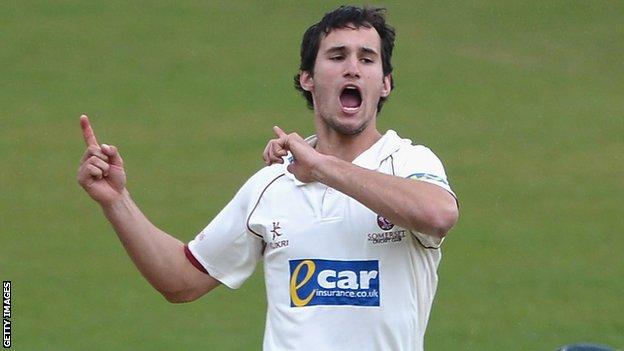 Somerset gave their hopes of avoiding relegation a major boost by denting Middlesex's title ambitions with an emphatic innings victory at Lord's.

Seamer Lewis Gregory took a career-best 5-38 as the home side were all out for 164 soon after lunch on day three to lose by an innings and 179 runs.

Neil Dexter top scored for Middlesex with 35 not out as they only managed to add 112 to their overnight 52-2.

It was another undistinguished batting effort by the home side, who only mustered 106 in their first innings, having begun the match in third place, 31 points adrift of leaders Yorkshire and 5.5 behind Durham in second.

Sam Robson was first to go, caught by Trescothick at slip off Gregory for 29, but it was the loss of four more wickets for 31 runs, which saw them slump to 116-7 that really ended their hopes of taking the game into the final day.

John Simpson could at least consider himself unlucky when Dexter's firm drive was deflected into the stumps by bowler Craig Meschede and he was run out backing up.

Dexter and James Harris managed to see Middlesex to lunch, but Harris (22) gave a return catch to Gregory, who finished things off by having Tim Murtagh caught and Ravi Patel lbw in his next over.

It was only Somerset's second win in the Championship this summer, their first since beating Derbyshire in June - and their first at the home of cricket for 30 years.

"It's very upsetting for everyone. We didn't play very well against Derbyshire last week - but to be bowled out twice in a day, in reality in 90 overs on a good pitch, is unacceptable.

"The players know that and the challenge is to ensure it doesn't happen again and that we put in a much better performance next week against Surrey at the Oval.

"It's hard to take as you try to work out what's going on, obviously there's been some poor strokeplay by a number of batsman."

"A fast yorker from Lewis Gregory which scattered Ravi Patel's stumps provided an appropriately emphatic conclusion to a Somerset victory which was as crushing as it was unexpected.

"Skipper Marcus Trescothick couldn't put his finger on the magic ingredient afterwards, but whatever it was, abject Middlesex could certainly do with some of it."