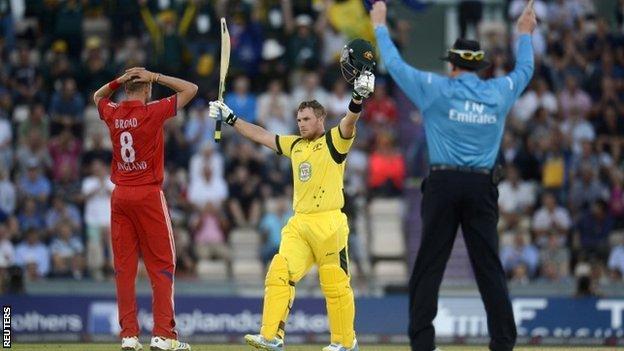 Aaron Finch smashed a Twenty20 record 156 off just 63 balls as Australia beat England by 39 runs in the first of their two T20 internationals.

The opener hit 14 sixes and 11 fours to help Australia record their first win of the summer over England and a first international victory in 200 days.

"Sometimes you have to hold your hands up," England captain Stuart Broad told BBC Sport. "It was a magnificent knock by Finch and he won the game for Australia.

"It was incredible striking and to hit 14 sixes in an innings is pretty special. It was amazing to watch but unpleasant to bowl at.

"The crowd will go home happy having seen 460 runs off 40 overs, but there are 11 disappointed Englishmen, that's for sure."

On any other night, Root and England's effort may well have kept them in touch but Finch's extraordinary innings left them with too tough a target to chase.

Finch, a 26-year-old right-hander from Victoria, signalled his intent by pulling the first delivery he faced, from Steven Finn, to the leg-side boundary for six.

He brought up his second T20 international half century with a straight six and then clubbed three successive maximums and two fours off what proved to be Root's solitary over to race into the 90s.

Finch looked set to break South African Richard Levi's record for the fastest international T20 century - 45 balls - but faltered for a couple of deliveries before finally bringing up his ton with a six to fine leg off his 47th ball.

Once he reached his century, Finch accelerated again, hitting a six to move past the previous international best of 123 by New Zealand's Brendon McCullum.

He took just 13 balls to move from 100 to 150, reaching the landmark with another maximum.

But, with Chris Gayle's T20 record score of 175 in sight, his stunning innings was ended when he chopped a slow bouncer from Jade Dernbach onto his middle stump.

"I was pretty lucky. A few things went my way but it was nice to get on a roll," Finch told BBC Sport.

"I got a little bit nervous as three figures approached and I slowed up the innings for a little bit but it was nice to carry on once I'd got the century."

Dernbach, who was the pick of the England bowlers, then bowled Watson with a superb slower delivery and removed Glenn Maxwell at the death as he finished with 3-34.

England opener Michael Lumb briefly looked like he may follow Finch's lead, hitting 14 off Mitchell Johnson's opening over but he was trapped leg before wicket by the left-arm seamer on 22 to leave England 33-1.

Alex Hales, Luke Wright and Eoin Morgan all fell cheaply as England limped to 42-4 and although Root, playing his first international T20 innings, and Ravi Bopara (45) put on 95 for the fifth wicket and Jos Buttler hit a rapid 27, they were unable to match Finch's hitting power.

The hosts did, however, compile their second highest T20 score, five adrift of the 214 they scored against New Zealand earlier in 2013.

Australia broke the record for most sixes in a T20 innings - 18 - while the aggregate score of 457 is the highest recorded, beating a tied game between Australia and New Zealand in 2010.

Earlier on Thursday, England's women regained the Ashes by beating Australia on the same pitch. They meet again at 10:00 BST on Saturday at Durham, ahead of the men's second T20 match.