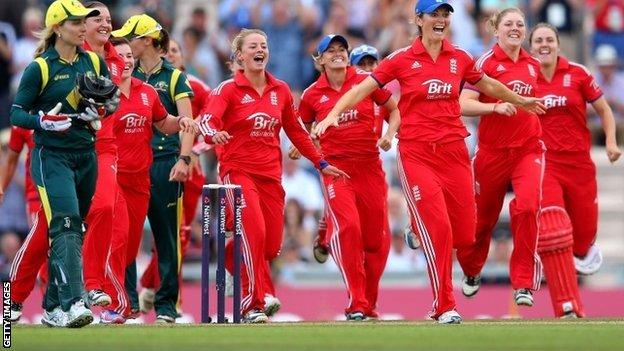 England regained the Women's Ashes by beating Australia by five wickets in their second Twenty20 match.

Lydia Greenway rescued the hosts with an England T20 record of 80 not out off 64 balls after they had been reduced to 9-3, chasing 128 for victory.

Meg Lanning top scored for the tourists with 60 before she was run out by Holly Colvin as Australia posted 127-7.

England were always on top during the Australia innings with Katherine Brunt bowling through and taking 1-15 from her four overs as the tourists were restricted to 26-1 off the opening six powerplay overs.

Lanning upped the pace midway through the innings, flicking Jenny Gunn for a leg-side six to bring up her third T20 half century but just as she looked set to push Australia on to a competitive total, she was run out in unfortunate fashion.

Alex Blackwell drove a Colvin delivery straight back down the pitch and in trying to field the ball, the England bowler deflected it onto the stumps with Lanning out of her ground to leave Australia 95-3.

The wicket sparked a collapse as Australia scored just 35 runs for the loss of five wickets in the final five overs.

Danielle Hazell (2-11) took both her wickets in a final over that also saw captain Jodie Fields run out as three wickets fell in successive deliveries.

However, England's reply was soon in tatters after Heather Knight (2) was bowled by Julie Hunter in the second over, while in the next, Sarah Taylor (1) was well caught by Sarah Coyte off her own bowling and the Australian then bowled Danielle Wyatt for a second-ball duck.

Edwards and Greenway steadied the innings with the former pushing singles while the latter used the reverse sweep and deft leg-side flicks to keep the scoreboard ticking over.

The pair moved the total on to 76 before Edwards tried to hit a ball over the top but was caught by Jess Cameron at mid-off.

Greenway continued to deflect the ball behind the stumps though and the left-hander brought up her 50 with a paddle sweep for four as she reduced the run-rate from eight-an-over to a run-a-ball.

Sciver chipped in with 13 before being run-out in the 18th over but by then England had advanced to 116 and Greenway wasted no time in knocking off the remaining runs, cracking two boundaries in the penultimate over before fittingly hitting the winning run.

England went into the game leading the multi-format series 8-4. The solitary Test match was drawn and, after Australia had won the first one-day match, England won the next two before wrapping up the series with victories in the first two Twenty20 games.

With two points for a win, England lead the series 10-4 with just Saturday's final Twenty20 game at Durham to come.