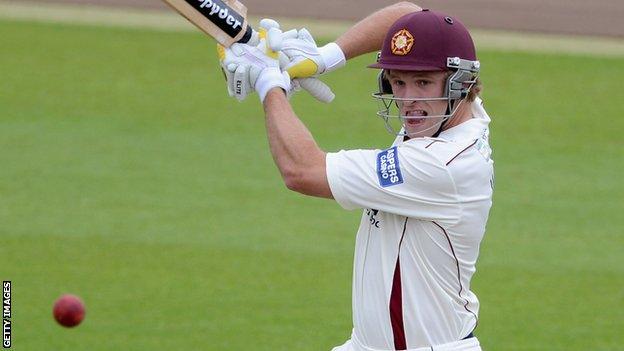 David Willey produced another dazzling innings as Northants tightened their grip on day two against Glamorgan.

The Welsh county fought back well after being bowled out for 241 on the opening day by reducing Northants to 236-5.

But Willey, fresh from making 167 in a YB40 game against Warwickshire, hammered six sixes in 81 off 73 balls.

He fell to Graeme Wagg, but Andrew Hall made 91 before running out of partners and play ended when Northants were all out for 453 - a commanding lead of 212.

Seam bowler Michael Reed posed the most questions for the home side during the morning session and removed openers Stephen Peters (61) and James Middlebrook (59) after a stand of 115.

David Sales made a useful 48 before he and Steven Crook fell to successive deliveries from Andrew Salter and it was left to Willey to keep out the hat-trick ball.

From there, Willey counter-attacked superbly and a maiden first-class century was in his sights when he edged to the keeper after hitting Wagg's previous delivery for his sixth six.

It ended a stand of 115 with the patient Hall, who also added 62 with Trent Copeland (34) before the latter was bowled by Reed (4-109), but last man Azharullah, who signed a new two-year contract earlier in the day, was unable to see him through to three figures, falling lbw to spinner Dean Cosker.

"David Willey is in the form of his life right now - he is the top wicket-taker for Northants in first class cricket and his batting is reaching a new level.

"With his side side struggling on 236-6 and the ball turning, the 23-year-old turned defence into attack and bludgeoned the spinners into submission.

"His 81 may have been a decisive knock in this game and Andrew Hall, who top scored with 91, and many others at Wantage Road are urging the England selectors to give Willey a chance at senior level."