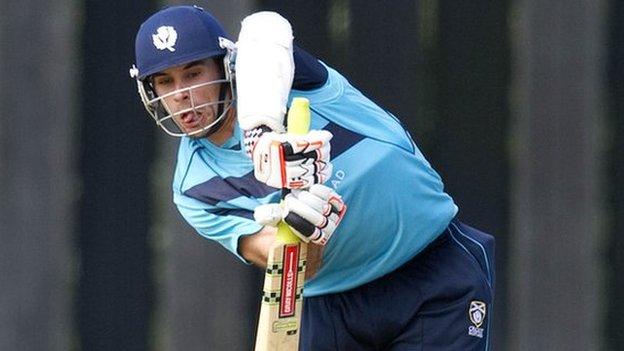 Scotland captain Kyle Coetzer has been ruled out of the one-day international against Australia at the Grange on Tuesday due to a wrist injury.

The 29-year-old top order batsman has not recovered from ligament damaged sustained on duty for Northants.

A replacement is still to be named, but Preston Mommsen will now lead the Scots in Edinburgh.

Australian-born Hamish Gardiner could make his Scotland debut after being named in the squad this week.

Gardiner, 22, has a Scottish mother and has impressed for the Highlanders and the Saltires this season.

But experienced all-rounder Neil Carter is unavailable due to work commitments and is replaced with Safayaan Sharif, who has recovered from a side injury sustained during Scotland's tour to the UAE in March.

Gordon Goudie is also included and the seamer has good memories from a 2009 meeting with Australia at the Grange when he ended with impressive figures of five for 73 from 10 overs.

Also included is batsman Freddie Coleman, who recently made his breakthrough to the full Warwickshire team after a season of promising performances for the Saltires.

Scotland coach Pete Steindl said: "We're really looking forward to welcoming the Australians to the Grange for our big home game of the summer.

"It's always a great occasion for the players and staff to test themselves against the likes of Australia and we are looking forward to the challenge."